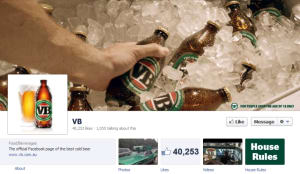 The ad watchdog has ruled user-uploaded content on VB's official Facebook page is sexist, homophobic and obscene and that advertiser Carlton & United Brewers (CUB) is responsible for it.

The complaint also referred to a recent Australian Federal Court ruling wherein health company Allergy Pathway was “responsible for third-party comments [containing misleading claims] where it knew of them and made a decision not to remove them” on Twitter and Facebook.

“In this context one could come to conclusion that some of the content on the official Facebook [page of VB] ... breaches [ad standards] ... guidelines,” wrote the complainant.

The brewery also compared the user comments posted to the VB Facebook page “to a conversation say at a restaurant or pub ... if [the] conversation is not to your liking you can either attempt to influence its direction through your own user comments or not view the page”.

CUB also argued strenuously against user content being classified as Advertising or Marketing Communications and subject to ad standards codes as it is “not material 'over which [CUB] has a reasonable degree of control'."

The brewery stated “pre-moderation” and consistent surveillance of user-generated content  on the VB Facebook page “is not commercially feasible [and] therefore CUB has no practical control over [user] content”.

“We submit that the Code must be read with recognition of the commercial realities that apply in the marketplace,” wrote CUB.

“The only way for a producer to be certain that no inappropriate user comments appear ... [is to] not to have that Facebook page at all (which is commercially unsustainable given the importance of social media in marketing in 2012 and its likely increased importance in future), or to review every user comment before allowing it to appear on the page.”

CUB argued the VB page is “self-deprecating”, “tongue in cheek and ironic” in tone, as is VB's broader marketing message and that much of the user content is “intended to humourous” and “intentionally outrageous”.

CUB also stated Facebook itself had filters in place which ensured only users registered as being 18 or older could see the VB page, ensuring it was not accessible to users below legal drinking age.

The ASB ruled “the Facebook site of an advertiser is a marketing communication tool over which the advertiser has a reasonable degree of control and that the site could be considered to draw the attention of a segment of the public to a product in a manner calculated to promote or oppose directly or indirectly that product”.

Furthermore, the ASB stated “the Code applies to the content generated by the page creator as well as material or comments posted by users or friends”.

User content was also ruled to be in breach of standards relating to obscene language and representations of sex and sexuality.

The Australian reported today the complaint was submitted by two Queensland-based academics who were “testing the [ASB] system” but “did not anticipate the broader ramifications” nor the complaint to be upheld.

The topic came to a head yesterday, when industry experts slammed the ASB's ruling that user-generated content on Facebook was the responsibility of the advertiser.

The CUB ruling is the second determination relating to this topic. The ASB has also ruled on the Smirnoff Facebook page. While the Smirnoff ruling was dismissed, this was the first time the ASB stated user commnets were considered the responsibility of brands.