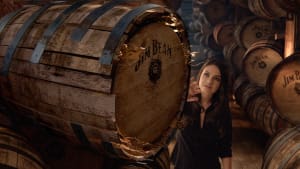 The move is part of a wider Publicis alignment with Jim Beam with Leo Burnett Chicago winning the global creative in 2016.

Leo Burnett Sydney was barred from picking up the account due to its conflicting relationship with Diageo, which owns rival Captain Morgan and other alcohol brand. Instead, Publicis has placed the account at another agency within its network.

Beam Suntory tells AdNews Saatchi and Saatchi is the "preferred" agency locally but nothing official confirmed as yet.

The Works parted ways with the company last November ending a 14 year relationship after a decision to align the brand globally.

The independent agency previously worked on Beam Suntory brands, including Jim Beam and Canadian Club. AdNews understands the Canadian Club account is still up for pitch.

It was a significant loss for The Works which had grown its local duties into the role of lead creative agency globally.

The Works was behind the successful Over Beer? campaign

The Works introduced Mila Kunis as a global ambassador for the Jim Beam brand in 2014, with several ads starring the actress released in the last three years.