What Triple J's first 'commercial broadcast' would sound like 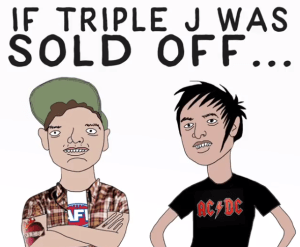 ABC-owned Triple J has revealed what it would sound like if the national radio network were to become a commercial station, after a recent Liberal Party poll suggested the ABC should be privatised.

Posting on its Instagram account and hosts Ben and Liam's Facebook page, Triple J uploaded audio sent in by a listener that created a 'new' show on the privatised version of the station.

The slot, hosted by fictional DJs Zipper and Shitstick, talks about all the things the 'new' Triple J stands for.

"Guess what I love? Australian music, guess what else... drugs and one other thing, claiming we are impartial broadcasters but secretly being massive lefties," Zipper says.

The audio also claims the show is "forward thinking" and "believes in equality", having a "real-life woman" on air.

Taking a jab at commercial stations by naming her "the token woman", the hosts knock back the female host when she says, "If I could just interject, guys."

"Did you say pies?" Zipper asks, and when she replies no, they tell her to "shut up" because the only thing they care about are "pies and footy".

The audio also pokes fun at commercial radio's fondness for toilet humour by talking about a mock Dutch artist, Miguel Van Der Fart, who makes music from "every orifice".

The show then introduces the next song, by a Triple J Unearthed act, "Spice Bitch and Crumpet Boogie Rat from Wing Ding State Primary".

The audio was posted shortly after ABC boss Michelle Guthrie fired back at the Liberal Party yesterday, shooting down the idea that the national broadcaster should be privatised.

Speaking at the Melbourne Press Club, Guthrie addressed the recent policy motion by the Liberals which stated there was "no redeemable value in the public investment in the ABC".

She said the idea carried a "misplaced notion" of both privatisation and conservatism.

Check out the audio below: