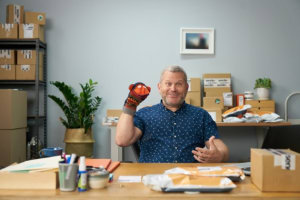 Australian startup courier service Sendle has launched its first ad campaign in its three-year journey to challenge Australia Post as the main delivery option for small- to medium-sized businesses (SMBs).

The ad, by The Glue Society, calls on Aussie companies to reconsider their options and features the phrase “post without the office”, which Sendle successfully trademarked in 2017 following a David-and-Goliath legal dispute between the startup and Australia Post.

“We defended ourselves,” CMO and co-founder Craig Davis tells AdNews. “We weren’t the aggressor but it was important to us to stand our grand and not be intimated by the prospect of going to court.

“We are concerned about helping small businesses and that’s our whole purpose, we aren’t interested in being aggressive in starting a fight but the truth is there hasn’t been any other delivery option for SMBs.”

Davis, who has held the chief creative officer role at JWT globally and Publicis Mojo ANZ, is confident Sendle can do a better job than the 200-year-old Australia Post service.

“If there is an incumbent that isn’t paying enough attention that’s an opportunity,” Davis says.

“We aren’t trying to poke or provoke anyone but everyone knows what Australia Post represents.”

Australia Post has been widely criticised in recent years for its failure to innovate and controversy around the large salary of its ex-CEO. Its monopoly has been threatened by the arrival of Amazon, as well as smaller startups, like Sendle and Ninja Van.

Sendle has been gaining traction, inking a delivery deal with eBay last year and raising $5 million in Series A funding in 2016.

But Davis recognises it still has a long way to go, which is why it’s investing in TV ads, as well as campaigns on Facebook and YouTube, and email marketing.

“We have a big obvious competitor and they have a physical presence in the market with post boxes and a long history. So there’s a battle for awareness because we don’t have that physical presence, being a tech company,” Davis says.

“We weren’t in the position to do anything for three years because our infrastructure just wasn’t ready. Now it is, and we’re keen to do something that will have cut through and visibility.”

As for what’s next for Sendle, Davis says the brand is growing at 20% month-on-month and he expects that trajectory to receive an uptick from the campaign.

“It’s our first big ad push and from something that started from scratch three years ago, it’s a big accomplishment to be here now."