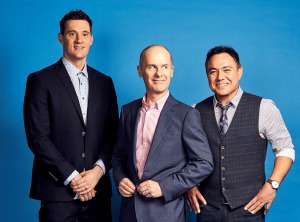 Stars of Have You Been Paying Attention? from L to R: Radio host Ed Kavalee, presenter Tom Gleisner and radio host Sam Pang.

Currently airing its sixth season, the show has been a consistent ratings performer for Ten in 2018, with episodes averaging more than 600,000 viewers an episode in the often low rating evening slot.

Using the format of a quiz show, each week the show's host asks five well-known guests questions about the news of the week. The panel is made up of comedians, radio presenters and TV stars.

Making a slow start in the ratings when it originally launched in 2013, the program has grown over the course of its five-year run and is currently number one in its timeslot in total people and the 16-39, 18-49 and 25-54 demographics.

“We love bringing Have You Been Paying Attention? to Australians every week," Ten chief content officer Beverley McGarvey says.

"The show has continued to get bigger each year since it debuted on Ten in 2013, with this current season being the most successful to date.

"It’s fantastic that Working Dog and CBS will now be able to bring this much-loved Australian format to a broader audience.”

The 2018 season is having its biggest audience ever since premiering, +148% higher than the first series.

“This agreement is a terrific example of the new synergies we have in Australia since acquiring Network Ten, and we look forward to partnering with the team at Working Dog Productions to make HYBPA? a global success," CBS Studios International senior VP, international formats Paul Gilbert says.

The show will join CBS’ portfolio of game and reality-based shows from Wheel of Fortune to America's Next Top Model.

CBS acquired Ten  in August last year and over the past 12 months has ramped up its influence in the business, last month flying a convoy of Australian media bosses across to the US to reveal further details of its strategy for the Australian network.