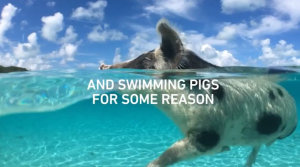 Shutterstock has cleverly recreated the infamous Fyre Festival ad using its own stock footage as part of its new global campaign "It's Not Stock".

The ad capitalises on the hype around Fyre Festival with a new video that looks incredibly similar to the original event trailer. It even includes the swimming pigs.

Originally sold as a luxury music festival, Fyre Festival invested heavily in marketing, hiring a slate of celebrity influencers to promote it on social media, including Kendall Jenner, who was rumoured to have been paid $250,000 for one Instagram post.

The festival collapsed and and subsequently created one of the biggest PR storms of the year with Netflix and Hulu later releasing documentaries on Fyre Festival's failure.

A key observation in the documentaries is just how much the founders of the festival had spent on marketing the event instead of the production of Fyre. With celebrity influencers the major draw card to the festival, the downfall of Fyre has sparked questions about trust in the influencer marketing ecosystem.

While Fyre Festival would have spent hundreds of thousands on its video, Shuttershock CMO Lou Weiss said the clip, which was a compilation of 18 different bits of footage licensed through Shuttershock, cost just $2062 to create.

“After watching the documentary and getting a better understanding of what it took to create the first trailer we knew we could create the same thing much cheaper and from our desks, so we decided to have some fun and do it,” Weiss told AdNews.

"We thought it would be a great way to show marketers and creative teams that you can truly create anything you want from our 12 million video clips and tens of thousands of music tracks in our Premiumbeat.com library at an amazing value compared to shooting original footage or creating your own music."

The video campaign was developed with the help of DiMassimo Goldstein in New York City and aims to remind the world of the quality and depth of Shutterstock's collection.

"We’re telling our story to inspire businesses around the globe to tell their stories in a compelling fashion," Weiss said.

The video ad is running across Shutterstock’s social channels, with Weiss telling AdNews the company has plans to put some paid media behind the campaign.