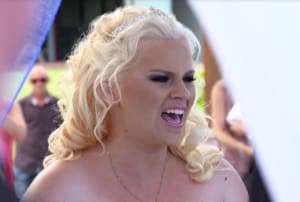 Seven’s Australia’s Cheapest Weddings has been pulled after just three episodes, citing “heavy traffic” in the 8.30pm timeslot as the reason.

While Seven says it will return the show to the main channel "in the future", it has not specified a date.

The show is about couples organising weddings on a tight budget, likened by Seven as having "Champagne taste on a beer budget".

It drew an audience of 708,000 metropolitan viewers on its debut night, however its second episode dipped to 485,000 people.

It airs at the same time as Ten's Have You Been Paying Attention? and Nine's Married at First Sight, which last week pulled a metro audience of 974,000.

The final of Winners and Losers ran in place of Cheapest Weddings last night.

The show received some backlash from contestants after the second episode aired, with couple Emma and Steve Dilliway complaining the editing process, rather than the random singing, turned their wedding into a joke.

Next week, the premiere of Mrs Brown’s Boys is set to broadcast in the 8.30pm slot.