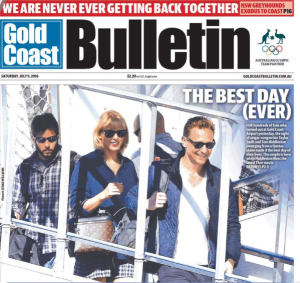 Unless you’ve been living under a rock, you’d know Taylor Swift and her new beau, Tom Hiddleston, arrived in Sydney last week. Not surprisingly, the media has scrambled to cover Hiddleswift’s daily activities Down Under and one newspaper has just won the coverage wars.

Over the weekend, the Gold Coast Bulletin, owned by News Corp, devoted every headline to her famous songs. From Bad Blood to Shake It Off, the headlines covered its usual news content with T-Swift tunes.

The newspaper unveiled its front page on Twitter, writing: “Notice a common theme in all of today’s front page headlines?” The announcement was retweeted 199 times and has received national coverage.

Australia’s newspaper duopoly is one that is often criticised for homogenising the market, with coverage focusing on similar topics. As eyes continue to wander to digital news sources, publishers are trying their hand at innovative ways to present content and also stand out on the news stand.

Deputy editor Ken Robinson told AdNews there was an element of marketing behind the front page, but it was mostly designed to have some fun.

"So much horrible stuff goes on in the world, so it was nice to have the opportunity to do something a bit lighter occasionally," Robinson says.

Robinson explained after Vanity Fair's comments about the Gold Coast in its Margot Robbie article last week, he wanted to celebrate the fact international celebrities frequent the sunshine coast.

Earlier this year, News Corp’s The Daily Telegraph experimented with a translucent wrap for its front page coverage of the Budget.