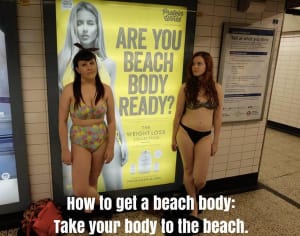 "You're god damn right we're beach body ready. Exactly as we are," wrote @EscapologistGl on Twitter.

London mayor Sadiq Khan has banned all ads promoting a negative body image on the Transport for London (TfL) network, sending a message to the advertising industry.

Host has revealed its new creative line up, with Chris Little joining the agency after eight years at M&C Saatchi. Little was creative director at M&C and he will be joined at Host by the newly promoted Jon Austin who has also been named creative director. Austin is joined by Kirsty Gavin who was formally head of art at Droga5 Sydney, in rounding out the line-up. The CD team will head up a growing pool of diverse creative talent, including recent hires Josie Burns, Matt Ennis and Daniel Barrett.

News.com.au will utilise Facebook’s live video streaming feature to host Australia’s first online federal election leaders’ debate, reports the NewsMediaWorks. The debate between Prime Minster Malcom Turnbull and Opposition Leader Bill Shorten will be streamed on news.com.au’s website and Facebook page, and the Facebook Australia page from 6.00pm on Friday. News Corp Australia columnist and Studio 10 host Joe Hildebrand will moderate the debate which will be filmed at Facebook Australia’s headquarters in Sydney in front of a live studio audience.

Overnight at Apple's developer conference it has revealed the changes which will be coming consumers way when its latest software offering, iOS 10 drops. Some updates include updates to messenger, with the offering to now include animation and even invisible messages. Maps has also been redesigned and Siri is also now open to developers.

“iOS 10 is our biggest release ever, with delightful new ways to express yourself in Messages, a native app for Home automation and beautifully redesigned apps for Music, Maps, and News that are more intuitive and more powerful, making everything you love about your iPhone and iPad even better,” says Craig Federighi, Apple’s senior vice president of software engineering. You can read more about the updates here.

M&C Saatchi has promoted creative director Andy Flemming to group creative director. In the role, Flemming will be responsible for driving the creative vision across the group’s agencies as well as ensuring copy standards, as he has a passion for writing – you can check out his articles on AdNews here. Flemming joined M&C Saatchi in 2006, previously working for VW Beetle, Chiat/Day/Mojo and George Patterson. He’s been responsible for penning some of the Group’s biggest campaigns including the CAN Launch with Toni Collette and almost every major Optus campaign from the agency including Idris Elba’s ‘Love letter to football’.