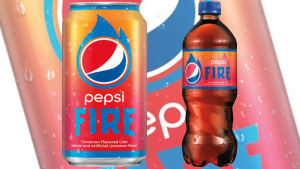 Pepsi is putting Snapcodes on the bottles and cans of its limited edition cinnamon-flavoured Pepsi Fire range over US summer. The codes will unlock exclusive branded geofilters, sponsors lenses and a mobile game within the app. This is Pepsi's biggest push on the platform and marks the first time a brand has used world lenses and internal games on such a wide scale. But this isn't the first time Pepsi has experimented with gaming on the app. Previously, Pepsi's energy drink brand, Gatorade, launched a Serena Williams-inspired video game ad which linked to the US Open. Pepsi may have drawn inspiration for its latest campaign from McDonald's, which made its cups Snappable last year.

Allianz will be a key sponsor of Vivid Sydney as well as a supporter of Vivid's Volunteer program, which provides sponsored volunteers across key to help guide visitors around the activation. Following the recent launch of the 'Be Inspired' campaign, Allianz managing director Niran Peiris says the partnership aligns with the brand's new inspirational approach launched by Cummins&Partners. Allianz will also be powering participating boats in the Harbour Lights installation. Vivid Sydney runs from 26 May until 17 June.

The Outdoor Media Association has announced the winners of its 2017 Q1 Creative Collection. The competition recognises and celebrates the most creative and innovative out-of-home (OOH) advertising campaigns. Work is judged across four categories; best creative execution, best use of a special build, best use of technology/innovation and best traditional use of the OOH medium. Full winners list below:

Best use of technology/innovation winner: