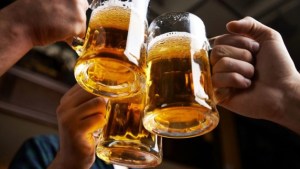 The issue has long been a topic of discussion in the industry, with people such as former NRL player Steve Ella and former AFL coach Mick Malthouse calling for alcohols ads to be banned during sport.

However, alcohol brands continue to advertise during major sporting events, including The Australian Open, which has partnered with Canadian Club, Coopers and Aperol Spritz.

The report was led by Cancer Council of Victoria and funded by National Health and Medical Research Council Partnership Project, the Foundation for Alcohol Research and Education (FARE) and VicHealth.

It pulls together studies of thousands of high school students over a period of more than 10 years.

Dr Victoria White, who led the report, said it was important to look at the variables influencing drinking amongst young people.

“One of the key findings of this report is that the risky drinking of adolescents can be reduced by restricting youth access to alcohol, reducing the availability of alcohol and reducing television advertising,” Dr White said.

“The study emphasises the important role of government-led, population-directed policies in cutting the strings on alcohol inducements that pull our young generations towards problem drinking.”

Despite teenagers being exposed to less advertising over the years, the report said more needs to be done to reduce drinking.

In 1997, when the research began, teenagers were exposed to an average 21-34 alcohol ads a month. This dropped to between six and nine a month by the end of the research period in 2011.

However, the report did note this drop could be the result of increased advertising on the internet and sponsorships.
It's the first study to use target audience rating points (TRPs) to look at the level of advertising on Australian TV over a 15-year period.

It found that of the five alcohol drinks categories examined, beer ads contributed the most to the overall alcohol TRPs in all study years.

Another finding was that newspapers were the preferred advertising channel for retailers, attracting around 80% of ad expenditure.

It also found that in 2008, the year a tax was introduced on premixed spirit-based drinks, there was almost no adult or adolescent TRPS for the products.

Following the findings, the report argues that self-regulation hasn't been good enough to shield teenagers from advertising and joins calls to lift the exemption allowing unrestricted advertising during sporting events on TV, including ads.

However, it did note limitations to the study, including not being able to capture information on exposure to alcohol ads on pay or cable TV, although free-to-air TV dominated in Australia during the period the study covered.

In the UK, brands such as Diageo, Pernod Ricard and Carlsberg partnered with tech giants Facebook, Snapchat, YouTube and Twitter to address the issue around alcohol advertising.