Meet Grant: The only man designed to survive a life in advertising 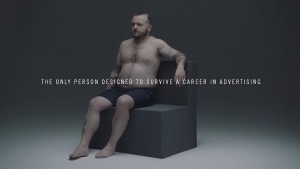 Imitation is the sincerest form of flattery. But what about parody?

In a hilarious spoof from Cummins&Partners, Clemenger Melbourne's heavily lauded Meet Graham has been transformed from an ad for road safety to the only person designed to survive a career in advertising.

The clever spot, directed by Armand de Saint-Salvy, reveals the various characteristics you need to make it in advertising; a removeable spine for client meetings, smaller than average genitals, an extra liver and of course, Grant is a white male.

It draws attention to the many strains and stresses of this unforgiving industry while poking fun at one of the most decorated campaigns of 2017.

The campaign was created for an upcoming award show by the Melbourne Advertising and Design Club (MADC).