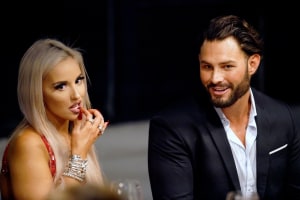 Usually the highest rating episodes for the show, last night's dinner party was no exception, as the show's audience continued to build on an audience that is currently averaging over one million metro viewers an episode.

By comparison, last night's dinner party drew only 500,000 viewers less than the final dinner party episode for last year's season, which drew 1.76m viewers and was the second highest rated episode for MAFS that year.

The early success of the show has given Nine one of its best starts to the ratings in years, with Nine chief sales officer Michael Stephenson labelling it a "true cross-platform behemoth".

“In the modern media world, the success of a program will be judged by its ability to captivate and aggregate audiences across all platforms," he said.

"MAFS is a phenomenon, audiences can’t get enough of the characters and the stories on Nine and 9Now.”

The total cross-platform average audience for MAFS in week one (across overnight, encore and VPM) has exceeded 2.139 million people for every episode.

Nine stated it expected this figure to continue to grow in the weeks to come as the show moves into the later stages of the social experiment, including more dinner parties, home visits and commitment ceremonies.

Overnight, Seven's MKR continued to keep its metro audience around the 800,000 viewer mark, with 816,000 viewers tuning in to see contestants Ibby and Romel's home restaurant take second place on the leaderboard.

Ten's I'm a Celeb elimination episode slipped below the 600,000 viewer mark once again, with 537,000 tuning in for the elimination itself, while 527,000 tuned in the for the earlier segments of the episode.

When it came to the overnight main channel battle, Nine continued to maintain control of audience share taking a 25.6% slice, while Seven came in second with 21.3% and Ten trailed with 11%, followed closely by the ABC with 10.7%.

Both Seven and Nine's tentpole shows won't air tonight, as the Big Bash and Young Sheldon take over the primetime slots for each channel, respectively, giving Ten's I'm a Celeb a strong chance of making an overnight ratings grab.