You need Flash player 8+ and JavaScript enabled to view this video.
" } 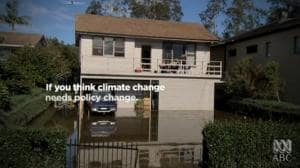 SYDNEY: A 'fake' TV spot created to promote The Greens on TV show the Gruen Nation impressed the political party so much it wants to officially air the ad.

Sydney agency Republic of Everyone was crowned the winner of The Pitch last night on ABC's Gruen Nation, with the show's panelists voting for it by four to one.

Regular Gruen panelist Leo Burnett CEO Todd Sampson said on the program, "It's the best ad The Greens have ever done. I'm sure you'll get a phone call".

Greens spokesperson Ebony Bennett confirmed to AdNews the party rang the Republic of Everyone this morning requesting the ad.

"Overnight we had a big response on our social media networks to the Gruen Nation ad. We're encouraging our supporters to share it online and post it to their sites and pages," said Bennett.

Republic of Everyone was tasked with creating an ad for The Greens that would convince mainstream voters to switch their votes at the ballot box to the minor party.

Republic of Everyone's Ben Peacock said: "After wining the panel vote on the show we've been inundated. It seems discussions about the using the campaign creative are taking place between the Green Party and Gruen Nation - we're watching with interest to say the least".