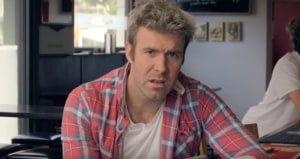 Just in time for the Cup, Melbourne-based comedy group The Peleton is addressing Australia’s gambling problem with a series of fake ads.

In two short videos released over the weekend, the group took aim at advertising from the betting category, parodying the format often followed by brands such as TAB, Sportsbet, William Hill and more.

Labelled as ‘new ads from BrokeLadsSports365’, the comedic videos highlight the serious impact of gambling in Australia. Punters are tipped to spend half a billion on the Melbourne Cup Carnival today.

The first 30-second spot is narrated by a brazen male as it zones in a guy who has “lost his life savings by punting on the chops like an Anzac”.

He continues: “We make a million bucks from you every day. Who do you think pays for all these ads? F*cking you! In the time it’s taken you impressionable kids to watch this ad, we’ve bought five more! And I bought a f*cking house.”

The second ad features the same man this time with a bunch of his mates set in a pub.

The voiceover says: “Have a look at this bloke, we’ve sucked him in with 100 bucks of bonus bets and a year on, he’s lost the house, the wife and the kids,” the voiceover in the second ad says. “He can either gamble his way out of it like a legend, or seek professional help like a big, fat softcock.”

It’s pretty well summed up with the last line: “Give us your cash, f*ckheads.”

These types of ads aren’t limited to the Melbourne cup or racing season. They are aired all year long around sporting events and have become a solid staple of Australian TV.

According to the latest government reports, Australia spends around $22 billion on gambling per year — an average of around $1,200 per adult. Those numbers are around double that of countries like the UK, NZ and Canada.

Read: Our feature on sports betting and gambling advertising: Place your bets

Earlier this year, betting ads were banned during live sporting events, and yesterday AdNews reported that gambling and betting ads could be axed from live sports broadcast on radio.

Just this week a new online betting company, Neds, was forced to take down one of its ads that was seen as promoting excessive gambling after more than 60 complaints to the ad watchdog.

The ad features a group of tradies on a worksite, all too preoccupied with a betting site to do any work. The company’s slogan finished the ad with “Neds, it’s time to bet.”