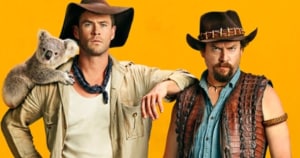 Tourism Australia cleverly tricked the internet into believing Chris Hemsworth and Danny McBride were starring in a reboot of the 1986-hit Crocodile Dundee - and has driven its digital engagement through the roof, according to ad tech firm Amobee.

It's now been revealed to be a marketing stunt for this year’s the Super Bowl – and so far, it’s paying off for the tourism body.

The interest is likely to keep building with another teaser for #DundeeMovie being released today starring Hugh Jackman.

Data from Amobee has found since the first teaser went up for the fake film, digital content engagement around Tourism Australia increased by 1256% - when comparing 19-25 January to the prior week, 12-18 January 2018.

You didn’t really think they’d bring back Dundee ... without me, did you?! #DundeeMovie pic.twitter.com/jHjcZSnGdn

Not only were the fake trailers an effective ad for Australian tourism, so far it's been the most impactful Super Bowl ad campaign, beating out brands such as Budweiser and Pepsi.

Watch all the 2018 Super Bowl ads so far here

Budweiser is a perennial Super Bowl favourite and its ad campaign is heavily anticipated, but Tourism Australia has managed to edge out the American fan favourite.

Bud Light is continuing its breakout "Dilly Dilly" campaign, while Skittles is promoting Danny Devito in its short teaser spot.

In Australia between 1-25 January 2018, 50% of all digital content engagement that was Super Bowl ad related directly mentioned Tourism Australia.

The teasers suggest a Super Bowl spot will follow with the aim of the campaign to raise awareness of Australia as a vacation destination among Americans.