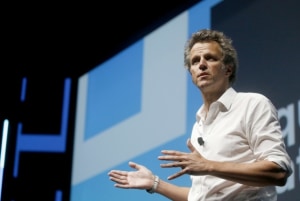 Despite his self imposed ban from this year's festival, CEO Arthur Sadoun took to the main stage, alongside creative chief Nick Law and chief strategy officer Carla Serrano, to present why Marcel is important to Publicis' future.

After a brief demo on how Marcel would work, the trio were presented with 20 precorded questions from industry figures, questioning Publicis' presence at Cannes, despite the announcement last year the holding group would withdraw from all awards for a year.

When questioned on what made Sadoun introduce the industry ban, after only a few weeks of taking over from Maurice Levy, he said it was a risk the group needed to take.

“We need to be bolder and we need to make sure we take risks. We took a big risk but at least we are doing it,” he said explaining that Marcel was expensive and needed the money.

“We needed the focus. We have hundreds of people working around the world to make this work and we needed a sense of urgency. We will not move forward without making dramatic changes."

For the last question, Publicis Groupe’ former Chairman and CEO Maurice Levy light heartedly questioned Sadoun on what his next “stupid idea” would be.

“No more stupid ideas. We are back in the trenches, trying to solve problems and helping our clients,” Sadoun replied.

The Publicis ban from Cannes Lions created a bad wave of publicity for the festival and industry skeptics complained it had become bloated and lost its focus on creativity.

Sadoun said he was surprised by how much coverage the ban received, but he still sees Cannes Lions as "extremely important" and promised Publicis would return next year.

"I feel that Cannes had lost a bit of this and I am extremely happy to see that it is coming back," he said.

"What Phil has been doing this year and the new way in which the festival has been organised is bringing this back. So we want to make sure that we are judged and that Cannes continues to inspire and we will be back next year."

It was recently revealed Publicis has nearly 400 entries in Cannes Lions this year, with production companies and clients footing the bill. Sadoun thanked Publicis partners for supporting the decision and entering work on their own accord.