Coca-Cola eyes off millennials; launches CokeTV in the UK 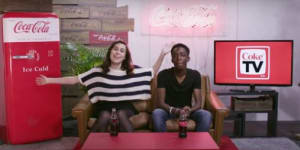 Coca-Cola is eyeing off millennials, with the brand working with popular YouTube vloggers in the UK to expand its CokeTV offering as a way to get in front of the lucrative audience.

Coke first launched CokeTV in Germany, with Marketing Week reporting that the German offering received more than 268,000 subscribers and 29 million views since it was launched in 2014, making the offering one of the most successful brand channles in the country.

Speaking to Marketing Week on the launch, Bobby Brittain, marketing director for Coca-Cola Great Britain, says: “The beauty of CokeTV is it puts the Coca-Cola brand directly into the world of the YouTube generation, reflecting their interests and speaking their language, week after week.

“It will be the most engaging platform to reach young adults in GB and Ireland, entertaining them with relevant and authentic content, uniquely served in a way only Coca-Cola can.”

The episodes will be hosted by British YouTube stars Manny and Dodie, with the pair recruiting fellow vloggers to take on challengers. The 'show' will also get exclusive access to events, to giver viewers exclusive content.

Brands appear to be piling more and more into Google’s video behemoth, with Hewlett-Packard (HP) locally previously showcasing its work with famous local vloggers Troye Sivan, Tyde Levi and SketchShe. The computing business previously explained that by working with these content creators it allows the brand to create inspiring content and stay connected to the next generation.

“HP’s portfolio of consumer products has never been better suited to this way of life, and most importantly, empowers users to push the boundaries of creativity.”

Despite brands looking to YouTube to target young adults, Think TV chairman Russel Howcroft still staunchly believes that TV is still the best way to attract millennials, with Howcroft recently hitting back at Vice's claims that this wasn't the case.

“To say that millennials don’t watch TV is a ridiculous claim and demonstrates a lack of understanding of the media landscape and viewing habits,” Howcroft says.

A report recently claimed that YouTube delivers a 77% higher ROI than TV, with the research suggesting that brands should be spending anywhere between five to 25% of their AV budget on the channel.

It is unclear if Coke will bring its CokeTV offering to Australia.