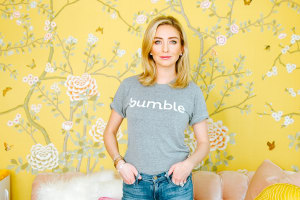 Dating app Bumble is exploring the idea of introducing advertising to its platform, founder Whitney Wolfe Herd has revealed.

Speaking at Cannes Lions, Wolfe Herd said the app was “not yet” seeking advertisers but Bumble was attending the festival to explore the opportunity.

Founded in 2014, Bumble has been rapidly expanding, launching an Australian office 18 months ago and recently establishing a New Zealand presence.

The app aims to empower single women and reverse gender dynamics in the online dating space. It competes with Tinder – a company Wolfe Herd co-founded before exiting and later suing for sexual harassment.

Bumble makes its money through subscriptions and “strategic partnerships with brands”, Wolfe Herd said, but declines most of the brands that approach Bumble.

"[Advertising] has to stand for kindness and serve some mission in the world," she said, adding that brands must "walk the walk" instead of just "putting something on a billboard".

She said Bumble parted ways with brands in the past that didn't meet its values and has introduced strict guidelines around who the business will work with.

The company founder also revealed Bumble is expected to reach more than 40 million users by the end of the year and is adding nearly one million users per week.

She attributes the app's early success to microinfluencers, which Bumble leaned on heavily when it first launched.

The business has also expanded beyond dating with Bumble BFF and its networking platform Bumble Bizz, which launched in Australia earlier this year.

Bumble debuted its first Australian campaign earlier this year, rolling out billboards in a bid to increase awareness.