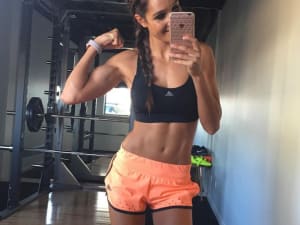 Boasting nearly five million Instagram followers, Itsines has risen to the top of the influential ladder one ab at a time.

She has successfully leveraged her social media power to become globally recognised as her own fitness brand, creating her BBG fitness program and increasing her following by showcasing real results with before and after images of clients (below).

Earlier this year she was named one of Times most influential people on the internet, alongside the likes of Kanye West, J.K Rowling and Caitlin Jenner.

Now, even Apple has recognised her ability to transcend with her millennial audience, starring the fitness guru in the ad, 'Climb'. In the 15-second spot focusing on the heart rate tracking ability of the watch, Itsines is shown running up a flight of stairs wearing her signature outfit of a crop top and shorts.

Itsines is the first Australian to feature in an Apple ad. With the tech company being arguably the most powerful brand in the world, its decision to recruit an Instagram influencer signals a broader move in the advertising industry.

It shows Apple is paying attention to influencers who may not have the same mass number of followers as celebrities like Nick Jonas (6.4m), but have greater levels of engagement with their fans.

We've seen Apple shift more and more to featuring celebrities over the past several years, only featuring A-list celebrities in its adverts such as Taylor Swift, Stevie Wonder and of course, The Cookie Monster. Now Itsines sits in the same category.