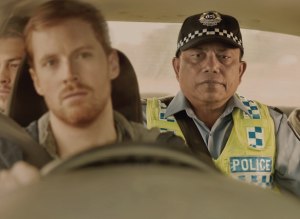 Police are watching, by 303 MullenLowe.

Western Australia’s Road Safety Commission has rolled out a new speeding campaign that warns drivers if they creep above the limit they will be fined.

The campaign, by 303 MullenLowe, will run across video, radio and outdoor and focuses on the increased police presence on WA roads.

The creative shows a police officer in the back seat of a ute, driven by a plumber, and a family car, driven by a mother, monitoring drivers that are being distracted. The motorists are not driving recklessly but are warned that even slightest amount of speeding could cop a fine, warning: ‘More Police, More Cameras’.

More cameras on WA roads come as a surprise to Western Australians who take an interest in the state’s finances.

Last year’s Budget papers announced the government would install speed and red-light cameras on WA roads, predicting that the revenue from fines would increase by 20% to $98.4 million in FY18.

Cynics will view such announcements as an attempt to bolster the state’s coffers, although in WA all of the money raised from speeding and red-light tickets go into the Road Trauma Trust Fund and is spent on road safety programs.

Although the WA government doesn’t publicly disclose ad campaign expenditure, other states tend to spend more on road and safety campaigns than any other area of public policy. It is reasonable to assume that WA, with its vast 147,700km network of roads, would spend a significant amount on safety each year.

Transport Accident Commission (TAC) is also no stranger to 'shock and awe' in advertising. The past 25 years of its road safety ads have included graphic images of crashes and accidents, designed to jolt the public into behaving better on Victoria's roads. But, for its new goal back in 2016, a future free of deaths and serious injuries on roads under the Toward Zero banner, TAC and agency Clemenger BBDO Melbourne, created 'Project Graham', a sculpture-turned-conversation piece designed to show how human beings would need to evolve if bodies were built to survive a low impact crash.

See: Get under the skin of TAC's 'Graham Project'

Road safety is regarded as one of the toughest categories in advertising as creative needs to strike the right balance of scare tactics, not being too preachy and ensuring there is a genuine human insight that will engage the target audience.

Analysing a campaign's effectiveness is challenging because there are many variables that contribute towards road safety. Modern cars are increasingly safer to drive and there are far more speed cameras and police on the road as deterrents.

However, analysing the Road Safety Commission’s figures on road fatalities can indicate the success of campaigns, and it is clear that in recent years WA’s roads are getting safer, particularly as the population grows.

Between 2008 and 2015, the number of accidents resulting in death or serious injury from speeding dropped from 479 to 134.

Comparing these declines to the amount of money invested into advertising campaigns, it becomes clear that large investments in road safety campaigns correlate with a drop in deadly accidents.

In 2016, there was a 21% surge in the number of accidents and fatalities on WA roads.

The creative, by 303 MullenLowe used hidden cameras to surprise road safety champions on the road (see below).

In 2017, the death toll on WA’s roads dropped back to 2015 levels of 161, including a 32% reduction in speeding-related road deaths and a 9% drop in drunk driving road deaths.

303 MullenLowe ECD Richard Berney is optimistic ‘Police are watching’ will also have a positive effect.

“The idea of cops as stoic backseat guardians watching over our speed is a sticky one,” he said.

“It’s a notion that’s stayed with me as I’ve been driving around our city and for the sake of everyone on our roads we hope all drivers across WA feel the same.”