Applying neuroscience to Cannes-winning work: Nike What Girls Are Made Of 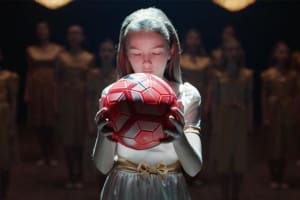 NikeWomen is continuing to ask charged, rhetorical questions to audiences in this Russian spot. It followed NikeWomen’s viral Arab ad, which garnered over one million views in just a few days, and features a young female choir singer become empowered by the presence of female athletes. Now, the analysts and Neuro-Insight find out what the public thinks of the campaign.

Nike - What Girls Are Made Of

Nike are well known for their campaigns that question common perceptions and dare people to be the greatest version of themselves. Not to be outdone, this year’s “What Girls Are Made Of” campaign challenged female stereotypes, it’s powerful execution landing a Gold Lion award for film at the 2017 Cannes Lion festival.

The ad opens on a young girl performing a Russian children’s song in front of a large crowd. In her classical voice, she sings about girls being made of “flowers and of rings”, of “gossips and marmalade”. But a female athlete soon breaks through the performance, a scene after which the girl starts changing the lyrics of the tune, much to the surprise of the very conventional audience attending.  The song becomes about girls’ “strength”, “perseverance” and “freedom from other people’s opinions”, with impressive performances of female athletes surrounding the young singer. The ad ends with the little girl now on the football field, looking straight at the camera, resolute to make a goal; the final message “You’re made of what you do. Believe in more” appears on screen, followed by the brand logo.

The narrative of this ad is powerful, but what are people truly taking out of it, and what is the emotional impact of this less cliched depiction of women? Neuro-Insight has looked at its second-by-second impact on the brain to determine the likely effectiveness of the ad.

Neuro-Insight measured brain activity to see how 50 females and 50 males responded to the ad. The specific technology used by Neuro-Insight is founded in work originally developed for academic and neuroscience research, and has been used to analyse the effectiveness of Cannes award winners for over five years. The technology allows us to simultaneously record viewer’s second-by-second changes in approach (like)/withdraw (dislike), emotional intensity, engagement and memory whilst watching advertisements. The measure Neuro-Insight predominantly focusses on is Long-term Memory Encoding, based on its strong and highly researched link to actual consumer behaviour. This measure reveals, on a second-by-second basis, what the brain is storing (or encoding) into conscious and unconscious long-term memory and is plotted in the form of a time series graph.   The higher the lines on the graph, the more strongly that moment in the ad is stored in memory and the more likely it is to influence consumer behaviour.

Looking at memory encoding response allows to see how well viewers follow the key message of the ad. The times series videos that are below contrast male and female viewers’ response to the Nike commercial.  The red trace reflects memory encoding from the left hemisphere, which is primarily responsible for the encoding of the detail in experiences, such as text, dialogue or brand messages.  In contrast the right hemisphere, which is represented by the blue line, is concerned with the storing of global features, such as soundtracks, scenery and facial expressions, as well as the emotional underpinnings of a particular experience.

The above time series graphs reveal key differences in response between male and female viewers, which are indicative of what both genders are taking on board.

Amongst the female audience, the highest levels of left brain response are for scenes where there is a key development in the little girl’s story: when she starts changing the lyrics of the song, when the rest of the choir appears behind her, and when we see her move from the performance space to the football field. The strong left-brain response indicates that, along with these moments, the non-stereotypical portrayals of women delivered by the lyrics are also being encoded. The high levels of left brain response carry through until end branding, making it likely that women will link the ad’s story to the Nike brand.

Figure 1: Women focus on the young singer and the detailed message of the song

In contrast, right brain response is overall stronger than left brain response amongst male viewers. Whilst the detailed message delivered by the young singer is a key driver of response for women, men are particularly engaged with scenes featuring athletes: right brain memory response peaks for every appearance of an athlete, suggesting the overall feel of the athletic performances dominates over the underlying message. Branding is associated with falling responses and low levels of left brain memory encoding, suggesting it isn’t coming across strongly.

Figure 2: Men are responding to the overall feel of the scenes featuring athletes

Looking at emotional responses (not shown here), it is evident that the ad triggers a much more positive emotion amongst women: levels of approach response are more than 3 times higher for female viewers. The difference is particularly marked during the second part of the ad, where the message changes from a stereotypical to a more empowering depiction of women: the portrayal of women as “made of iron, of striving, of self-dedication”, “made of bravery” and “will that is harder than stone” is associated with strong approach amongst women, indicating the ad’s message is very well liked. These lines are however associated with a fair bit of withdrawal amongst men: clearly, a narrative about women empowerment is most powerfully motivating for a female audience.

In summary, and perhaps unsurprisingly, the commercial is more effective with a female audience than it is with a male audience.  Although male viewers engage with the sports scenes, the underlying message is neither a strong take out nor a motivating force for them, and the brand itself isn’t that well encoded. However, amongst a target audience of women, the challenging stance Nike took paid off: it associated the brand with a motivating message that had strong cut through, resulting in an ad that is likely to build strong brand equity and have in-market impact.