ANALYSIS - The ‘remarkable’ rebound in the value of Australian media 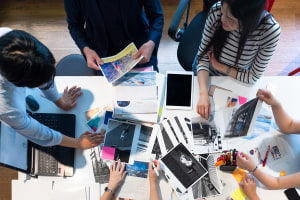 The value of Australian media companies has surged on the ASX since the start of the financial year after dropping hard during the confidence-sapping depths of the coronavirus crisis.

Nine Entertainment, News Corp, outdoor media specialist oOh!media, Seven West Media and radio broadcaster HT&E are all trading higher, up better than 40% on average since the start of the new financial year.

News Corp rose 13.6% to $21.63 on the ASX, following the release of September quarter results showing a lift in earnings as the global player pushes ahead with a digital future.

Nine closed yesterday at $2.40, up from a year low of $0.815 and $1.30 during the current financial year. Analysts have been impressed with the media group’s switch to digital revenue, the build of subscriptions and the success of streaming service Stan.

Nine, nearing its year high of $2.58, has a market capitalisation of more than $4 billion. The price climb since the start of the financial year:

And this upswing is starting to spill over into other media.

oOh!media's steady rise since the start oif the financial year:

Brain Han, senior equities analyst at Morningstar, described the rise of the media stocks as a ”remarkable turnaround”.

He says the rise appears driven by a retreat of investor fears from the hysterical levels during the depth of the economic lockdown and improving advertiser and consumer sentiment.

However, caution is needed.

“The rising prices of many media stocks appear more momentum than fundamentally driven,” Han says in a note to Morningstar clients.

“However, following momentum in investing always works well, until it doesn’t. Sector fundamentals may be improving.

“Overall advertising spend from August to date is likely down mid- to high teens percentage year on year, from around 35% to 40% decline on average from April to July.

“But advertising revenue is still DOWN, and the economic outlook remains precarious enough that fiscal stimuli are aplenty and further monetary easing looks likely.”

Shares in broadcaster SCA have been fairly flat but in recent days have started to climb. Yesterday the shares were up more than 16% to $2.65. This is still a long way from pre pandemic levels of around $6 but well off the low of just a bit higher than $1.