ABC: Newspaper sales down across the board

The latest numbers from the Audit Bureau of Circulations (ABC) for the six months to December 2014 show that newspaper circulation continues to fall across the board.

Net paid print sales for all metropolitan newspapers is down 8.62% year-on-year, with the Fairfax Media-owned The Age, Monday to Friday edition being the hardest hit in terms of print only sales, dropping 25.71% year-on-year.

Fellow Fairfax publication The Sydney Morning Herald didn't fair much better, with the print sales of weekday edition of the paper falling 17.6%.

Digital sales continued to buffer the losses experienced in print, with total mastheads sales fairing better, however both major publishers, despite investing in digital and bolstering staff in the area have still experienced losses.

Despite Fairfax's positive digital growth across all of its metropolitan mastheads, overall total sales are down 4.55% year-on-year.

News Corp faired slightly worse with digital sales for the Saturday edition of the Herald Sun losing ground in digital sales, as well as all of its Northern Territory publications, meaning the publisher's total masthead sales were down 6.58% compared to December 2013.

In terms of total masthead sales, News Corp's Australian newspaper faired the best moving just 0.4% backwards since December 2013. The Australian can thank its strong digital sales for the result with the paper's digital growth cracking 12.87%. The paper also increased the sale of its package deals, print and digital packages, by almost 1000 or a growth of 38.26%.

According to emma papers have a much higher readership than what is shown through paid sales figures, with the metric giving The Sydney Morning Herald a total readership of 5.1 million for the 12 months to December 2014. This is compared to total paid sales of 213,759 for the masthead. 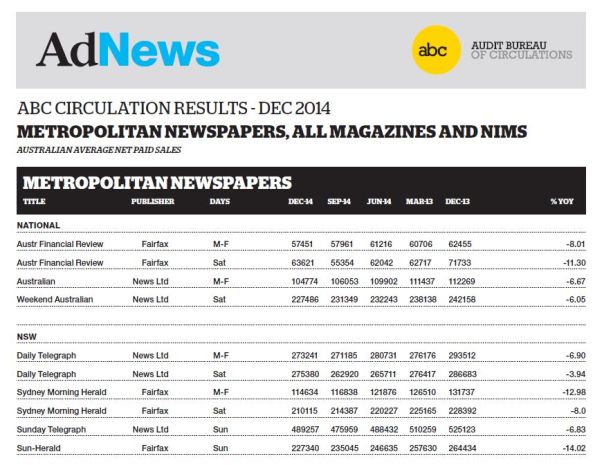