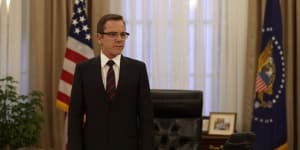 Netflix and the ABC have been slammed on social media for “the worst product placement ever” in a recent episode of Kiefer Sutherland’s drama Designated Survivor.

The scene shows an FBI agent, one of the main characters in the show, in a discussion with her colleague. She then pulls out her mobile phone and starts the engine of her Ford Fusion, with the camera zoning in on the app interface.

The camera then moves inside the car and shows the Fusion dashboard firing up. The TV screen within the car displays a large Ford logo. The camera then cuts back to the agents to show another smartphone shot before they walk towards the car.

Designated Survivor is produced by the ABC and hosted on Netflix. In Australia, is it labelled a "Netflix Original".

Viewers were quick to call out the “clunky” and “forced” placement from Ford.

Congrats to #DesignatedSurvivor for having the worst product placement I've ever seen. I actually thought they had cut to commercial.#Ford

Ok. I'm quite a fan of #DesignatedSurvivor but the totally unsubtle product placement by @Ford In Ep 18 was just cringeworthy.

Holy crap, the @Ford product placement in the middle of #DesignatedSurvivor was the worst...EVER 😂😂😂😂

Watching last night's #DesignatedSurvivor and did I hallucinate or was that just the most blatant product placement ad for Ford EVER?

It’s not uncommon for shows to use product placement with the likes of MasterChef and The Block often spruiking building and cooking brands.

It’s worth noting Netflix doesn’t have advertisements, unlike its US rival Hulu, and instead relies on subscription revenue as well as smaller income from merchandise and franchising.

As it invests more in Netflix Original series viewers should expect more product placement on the platform.