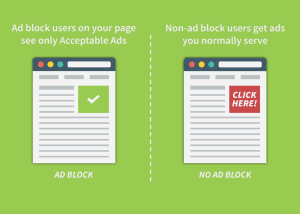 Google and AppNexus have pulled their support of adblocking software company Adblock Plus, following the news it will begin to sell ads.

Adblock Plus announced it would launch an advertising service to help marketers place “acceptable” ads, hoping to combat intrusive ads on the internet.

While reports have claimed it is a counterintuitive move for an adblocking company to sell ads itself, Adblock Plus argues the service will make it easier for publishers to use pre-approved, nonblocked ads and thus create a better experience for users.

Google’s ad boss said the company is ending its relationship with ComboTag – the ad tech company that Adblock Plus’ parent company Eyeo Gmbh works with.

At a digital marketing event Dmexco, Sridhar Ramaswamy, Google SVP of ads and commerce, said: “We were just as surprised by the announcement as you were… We certainly have no relationship with Eyeo when to comes to this effort.”

Ad software business AppNexus released a statement to AdWeek saying the move from Eyeo is “fundamentally harmful to the ecosystem” and they hold the practise of siphoning off advertising dollars that should be going directly to publishers in “low regard”.

Tyler Greer, Head of Strategy APAC at advertising intelligence firm Exponential, says leaving aside for a moment the deep irony of adblockers selling advertising, this is one of the most “brilliant business pivots in recent memory”.

“With a critical mass of users now under its belt, AdBlock Plus, and potentially other adblocking providers, are setting themselves up to control access to the internet for advertisers,” Greer says.

“Having effectively ring-fenced millions of online users, the business can now decide when and how to allow brands to deliver the message.

“It also reminds us that the internet is not a free service and that virtually at every set it needs to be monetised and this will either be through ads or through subscriptions, and most people are not prepared to pay for the latter. Publishers need advertising, and adblocking has been a huge hindrance to this, so a service that opens the gates has to be beneficial for them. Assuming they can get themselves on the AdBlock Plus whitelist and what that costs.”

Not an unexpected shift

Mitch Waters, MD AOL Platforms ANZ, says it is an interesting, but not altogether unexpected, strategic shift which will be intriguing to see play out. He says there are definitely some positives that should flow from this in terms of encouraging – or more specifically requiring – better and more intuitive creativity to improve the user experience.

“It will be key, however, to understand how the ‘quality’ of accepted ads will be determined and what the criteria will be,” Waters says.

“The cynic in me can’t help but wonder if it will be affected by campaign spend and if the parameters might become fluid in times of low revenue - time will tell.

“Another unanswered question will be how the ad blocking consumer reacts. After all if you pay for an ad blocker than presumably you want to block ads; it is a binary decision. So its success or otherwise will depend on the consumers willingness to embrace the new offer.”

It’s no secret publishers are trying to solve the problem of monetising their digital content, most of which is still done via digital advertising. Just today, Bauer Xcel MD Christian Fricke told AdNews that monetising mobile is the hardest challenge for the global publishing industry.

Acceptable ads are likely to be less valuable than the ads a publisher could otherwise display, limiting again what a website can earn. In setting up its own market place, Adblock Plus has built a bridge to the internet user but will now charge a toll to those interested in crossing.

With Adblock Plus aiming to collect 30% of revenue from publishers whose ads are shown 10 million or more times to users, Australian tech startup Unlockd CEO Matt Berriman noted it is concerning to not only publishers, but marketers and even the platform’s own users.

“Not only are they now reversing their stance on advertising, it still fails to solve the publisher’s biggest problem — targeting the right ad to the right consumer at the right time whilst maximising revenue opportunity,” he says.

Andrew Hughes,founder at Sydney-based digital consultancy Louder, which works with both large publishers and advertisers, says publishers have and are within their rights to block poor advertising creative and tracking tags, so why is the user not entitled to block a poor user experience?

"If a publisher wishes to restrict blockers access to content - good luck, determined users will prevail, and may abstain ongoing," Hughes says.

"Unfortunately, if advertisers continue to produce/recycle poor or intrusive ads, and buy placements that contribute to a poor user experience (cheap?), then blockers will continue to flourish. It is an industry issue, and users are forcing the hands of both - Adblock Plus is just capitalising on a high value audience in the same way that publishers do."

Greer adds it is worth remembering that adblocking as an idea has gained traction because of the way in which advertisers and publishers often treated their users.

“Whilst the dreaded pop-up and overlay are fading as the space becomes better regulated, bad user experiences still exist,” he says.

“The governing bodies has done a good, if often reactive, job of standardising and regulating the advertising experience, but nothing will do it better than the “this way or no way” approach that AdBlock Plus can now implement. So while we may be fearful that a single, business-focused company can have discretion over which ads make it through to which publishers, the result may end up being a cleaner environment for the consumer.”

"If you're a small publisher, such as a new gaming app, or a niche publisher that does cooking content, you cannot afford to pay the ransom that Adblock Plus is charging. Their model is to inject their own ads into the white space left by their adblocking software. What this means is that Adblock Plus will make money from the ads, not the publisher. The good players are being hurt by this move from Adblock Plus."

InSkin Media GM Matthew Newcomb says Adblock Plus’ opportunity arises from the broader problem of too many ads on one page, especially on smartphones.

“It’s on advertisers not to buy intrusive advertising formats. When advertisers stop buying, publishers will stop selling and everybody will opt for high value and high quality. In this scenario there is no opportunity for businesses like Adblock,” he says.