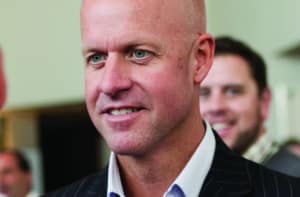 One of Mark Zuckerberg’s earliest hires at Facebook, Paul Borrud, arrived in Australia in 2009 to open Facebook’s local operation before quitting earlier this year but calling Australia home.

Facebook has been hunting for his replacement all year, culminating finally in the appointment of Google’s Asia-Pacific head of mobile, William Easton, last Friday.

There is still plenty of speculation around whether Borrud sold his Facebook stock before or after its recent IPO – his shares were said to be worth tens of millions – and Borrud won’t discuss the issue.

But he did tell AdNews what he’s been up to for much of this year. When Borrud’s resignation was announced in January, he said it was to “pursue personal interests and spend time with his family.”

Often “family reasons” is convenient cover but surprisingly, Borrud, actually has been doing what he said.

He’s been volunteering at his kids school in Sydney’s Eastern Suburbs, serving as an ambassador for Surfaid, raising funds and awareness for the people of Mentawai, doing “service work” for the Kelly Academy in Mbita, Kenya, while his wife is working with some projects in Haiti.

The only bit of commercial work appears to be consulting to photographer Eugene Tan at Aquabumps Gallery in Bondi Beach, which has long been used as a successful small business case study for Facebook.

“I’ve been spending a lot of time with my kids,” he said. “It’s been fantastic.”