Ten's morning program with Ita and Joe mocked on Twitter 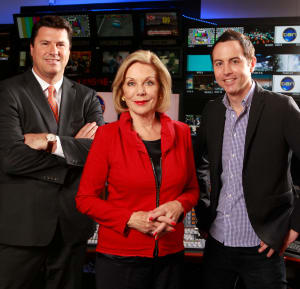 Channel Ten has found out the hard way this morning that some Twitterati are a cynical bunch with razor-sharp wit after a crowd-sourcing initiative to find the name for its new morning show has thrown up some, er, interesting suggestions.

The network this morning launched a Twitter competition with the hashtag #nametheshow to crowd-source potential names for its new morning show with Ita Buttrose and Joe Hildebrand as hosts. The winner will win a seat in the live audience for its premiere as well as a Samsung Smart TV and home threatre system. Ten promoted the competition this morning on Twitter, before adding: "Oh, and we hear The Morning Show is already taken. Actually, we'd love to avoid the word 'morning' completely. #NameTheShow"

The panel-based show is setting out to be "smart, fun and topical", according to Ten.

But the ever-irreverent Twitterati are having quite a fun time with the challenge. Here are some of the best ones:

@meatpieandsauce - "The old hag and joe", "please watch us, we love you" and "the circle"
@olivewhippet - "Axed in 2 Weeks"
@MrCsandDs -"Surely it will be "Lady and the tramp"
@MWhalan - "Ita and the Blowfish" and "Butt Brand"
Fairfax columnist @benpobjie - "Stick That Up Your Buttrose"
@bradsprigg - "Buttrose and Arsehole".
@the_red_heifer - "Dumb, Drunk & Ita"
@ResonanceSD - "I'm a journalist, get me out of here".

However, there were some seemingly sensible names:

They were pretty much the only serious suggestions. Really.

Of course, the new format won't be the first time the network has tried its hand at morning television. The Circle met its demise last year while its experiment in breakfast TV, which featured controversial panelist Paul Henry, was axed after less than a year on air.

Ten was also the target of a Twitter hashtag last year started by comedian Wil Anderson called 'Shows I Want Russel Howcroft To Make At Channel 10'.