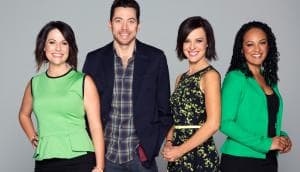 The numbers are in for Ten's breakfast line-up – Wake Up and Studio 10 – and they're at least higher than its predecessor Breakfast.

The much-touted premiere of Wake Up attracted 29,000 in its early slot and 52,000 for the main part, according to overnight figures from OzTam. This compares with 49,000 for the first episode of Breakfast, which had dropped to between 30,000 and 45,000 by the time it was canned nine months later.

Wake-Up was billed as breakfast TV with a twist, including a set broadcast from beachside in Manly.

Studio 10, which features Ita Buttrose and Joe Hildebrand, fared better. It attracted 61,000 people while Seven's The Morning Show had 189,000 people and Nine's Mornings was watched by 135,000 viewers.

Adam Boland, director of morning television, Network Ten said: “We always said it would be a slow build. Breakfast and morning TV is a tough ride but we are confident in the alternative we are providing.”

A Network Ten spokesperson added: “We are happy with the shows, which look great, and the day one numbers. We are taking a long-term view of the breakfast and morning TV market. It will take time to establish our new line up.”

Yesterday's debut of Ten's ambitious foray into morning TV, again, was led by Boland, best known as the wunderkind behind Sunrise.