Rogers: Programmatic will be the saviour of sales 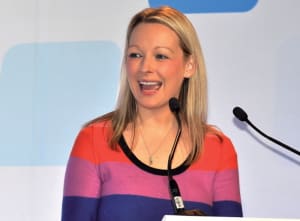 “The alarmists will report fears that machines will replace people with systems and algorithms that will allocate budgets, optimise and report, without a lunch or a trip to the Hunter in sight,” she said.

Rogers added this is not a future trend or something that’s going to happen in the next six years – it’s “massive already”. She said currently in Australia at least 22% of media is already programmatic, taking into account search, classifieds and display.

Rogers believed “without doubt” the majority of TV would be bought programmatically by 2020, although what was up for debate was exactly how it would roll out. “We’re really far from that now, but the obvious place to start is the pay TV sector. They have a natural advantage – their platform’s built on digital.

“With the power of the NBN behind them, they are the forerunners for IPTV and addressable TV, so MCN are really the ones to watch. They’ve also got that ever-interesting relationship with Telstra – imagine, if they were able to unlock all of those different areas, the addressable market they would offer advertisers.”

But she stressed that despite the heavy reliance and expectation on technology in the future, humans would still lead the charge: “John F. Kennedy famously said that man will always be the greatest machine ever invented. For our generation and for the generation of marketers after us, we need to strike a really delicate balance, between art and science, between gut feel and data, and between technology and people.”

This article first appeared in the 31 May 2013 edition of AdNews, in print and on iPad. Click here to subscribe for more news, features and opinion.