McDonald's to change its Golden Arches to Macca's 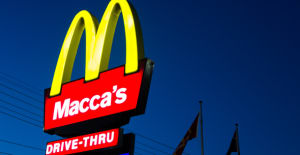 McDonald's will rebrand its Golden Arches signs to Macca's as part of Australia Day festivities.

McDonald’s will rebrand to its uniquely Australian nickname, Macca’s, across the country as part of Australia Day celebrations.

The restaurant chain has whole-heartedly embraced its nickname as it sets out to change over its signage across all facets including its famous Golden Arches at selected stores for a month.

The campaign, which will also includes TV, digital, print, out-of-home and social media executions, coincides with the launch of the new ‘Aussie Tastes’ menu.

The TV ad plays on the various nicknames Australians give each other. The campaign was devised by DDB.

McDonald’s chief marketing officer Mark Lollback said: “We’ve been a part of Australia for over 40 years now and we’re incredibly proud to embrace the nickname Australians have given us. What better way to show Aussies how proud we are to be a part of the Australian community than incorporate the name the community has given us across all our channels, even our signs.

“We are thrilled with this integrated response from DDB Group, not only does it successfully showcase our Aussie tastes range, it also celebrates our place in the Australian community, including our ‘Aussie-only’ nickname – Macca’s. It’s great to be able to achieve this in one seamless campaign that runs across PR, social media, TV, digital, print and outdoor touch points.”

DDB creative director Cam Hoelter said: “Being given a nickname in Australia is one of the ultimate compliments, so when we were asked to create a campaign for Australia Day we thought why not celebrate this by not only acknowledging the nicknames Aussies give each other, but also the one Australia has given McDonald’s – Macca’s.

“From the smallest crew member name tag to national TVCs, right up to physically renaming the famous Golden Arches signs right across the country to Macca’s, this idea runs fluently across all touch points and is truly unique to McDonald’s in Australia.”