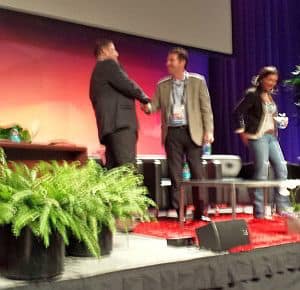 “Nielsen ratings are, at best, a semi-statistical extrapolation of something that may or may not be true.” - Jeff Misenti (left) on stage with Turner Broadcasting's Colin Coleman.

It was Fox News versus the rocket scientist – literally – at the Adobe Digital Marketing Summit on Thursday, as the broadcaster’s digital head struck a distinctly contrarian note against the data love-in.

The big revolution in data hasn’t happened, he argued, using the analogy of the operating system. Before the OS was invented, if you wanted a program, you put the disk in the computer. To load a new program, you had to take it out and put a different one in.

“The operating system changed everything. We look at these pieces across all our platforms, and there is not a connectivity between Nielsen, Rentrak, ComScore and all these other pieces, and now first-party data that we’re putting on top of that,” he said.

“So until that breakthrough happens and we have the operating system of data, we’re just going to look at this like, let’s just service the audience as best we can. And as much as everyone believes data will guide us, a lot of these decisions are going to come from feel.”

Coleman – who said what is happening in the media industry right now is “harder than rocket science” because at least “physics isn’t changing” – advocated the complete opposite approach, implying that without putting in place the organisational frameworks to prepare for the data wave, businesses could fail to recognise the important opportunities as they arose.

He cited an example of a deal with Nascar which gave Turner access to live telemetry from all the cars, which Turner then took and fed into a computer game engine to provide a real-time simulation of the race for paid subscribers, driving revenue.

“We created a disruptive experience and charged a fee,” Coleman said. “The question is, what are you going to do with all that data? There’s no uber-math [that’s going to give you the answer]. So unless you are prepared on the back-end of how you service the end user, you’re not going to be equipped.

“For a long time we said we were only going to go after the data that drives our strategic decisions. That’s still true [to a degree], but you have to be able to handle both sides of the spectrum. You have to place bets on where you think this industry is going – you have to go the central path and invest in technologies that are going to serve you well.”

Turner, whose brands include CNN, TCM, Cartoon Network, Boomerang and Adult Swim, had built a “house of data” with a “hub-and-spoke” structure, Coleman said, putting huge investment into breaking down and standardising global metrics across every department, from research to brand to ad sales. “Our secret sauce was recognising that analytics was key to tuning into the end user, and how we organised ourselves internally. Bringing that house of data together, I focus a lot on the glue, the people and the technology.”

Misenti said Fox News was “probably the antithesis” of Turner’s hub-and-spoke, house of data model. “We made the investment to say we care about data. [But] one of the questions you ask is, what’s the message that goes back to executives? It’s really simple – they don’t know what big data means, so I say ‘yes’, check the box, we do it. That’s all it is, right?

“We’ve said we’re not going to staff out, we’re not going to hire data specialists within the team, we’re actually going to instil this into the existing workflow. We work with extremely small teams, and so we have to take the approach of building it into the organisation. There’s a lot of data right now we just throw out, because it’s cool, but the number of people that understand what it actually does for the business is very small.

“So instead of trying to talk this up and confuse people even more, we take the approach of let’s be simple. Keep it as simple as we possibly can, and as the new technologies come on, let’s layer them in. I don’t think an editor should have to understand what a pivot point is – there should be a screen that when they sit down, they might not understand all of it, but they can at least make a good leap of faith and say this is actionable for me.”

The disruption for media companies, both on the B2C side with the challenges of engaging with consumers on multiple devices, and on the B2B side with increasingly complex relationships with advertisers, meant silos had to be broken down to respond more effectively, Coleman said.

Misenti again: “We all talk about silos, and I think we all want to break those silos, but sometimes those silos exist for a very good reason. There's very different objectives for the television folks and the digital folks, and getting those people connected is important, and we've seen some good successes there, but I still appreciate the fact that some of these silos have to exist.

“As much as we want to say we want to break them down and make the organisation flat and all that, when you really get into it, maybe it will get there eventually, but some of the other things we've seen is absolute flops as we try to force that, trying to force integration between the programming team on the linear network with what we're doing digitally.”

Frank Chung travelled to Salt Lake City as a guest of Adobe.

Have something to say? Send us your comments using the form below or contact the writer at FrankChung@yaffa.com.au