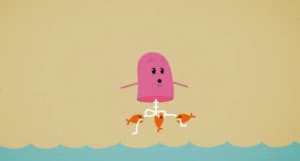 UPDATED: Since the original time of writing the 'Dumb Ways To Die' YouTube clip has surged yet again. As of 1pm today (20 November 2012) the video has been viewed over 9.5 million times.

ORIGINAL STORY: Metro Trains Melbourne's viral 'Dumb Ways To Die' campaign has gained another three million views overnight and now has over eight million hits, with creatives citing its catchy theme song and kids-style visuals as keys to its success.

It was accompanied by a theme song discussing the differing ways to die, which was available for download from the iTunes store or via the campaign's website.

Created by McCann for Metro Trains Melbourne, the ad is just one part in the campaign which is currently running across press, radio, Tumblr, transit and out-of-home.

In just 24 hours, the song had reached the Australian Top 10 iTunes chart and was placed sixth on the global chart over the weekend. Yesterday, it had just under five million views but has since gathered another three million overnight and now has over eight million hits.

Arnold Furnace managing director Tony Singleton told AdNews: "I think there’s a charm to it. The animation, the style, the non-political connectedness of the ad, that appeals to people. Its also probably been successful because of its difference of the kids-style visuals versus the serious subject matter.

"The juxtaposition means it feels fresh, new and different, this is something viewers wouldn't have been expecting from a safety campaign and found it worthy of passing on."

Singleton said viewers would want to share the irreverent campaign because of how it reflects on them.

"They get to show their friends that they have found something new, different and funny. Also, the tune is very clever and its extremely catchy."

He also said that Metro Trains Melbourne should be commended for agreeing to a safety campaign of this nature and despite this success, this style of ad wouldn't work for all brands.

"Great work isn’t just about coming up with good ideas, its about the brand's ability to go for it, so you've got to applaud the braveness of the company for going this way.

"It wouldn't fit the normal style of the brand or a safety campaign. I would say there's a fair amount of investment in this campaign and a lot of people putting themselves on the line, so this result is very good for the brand.

"Its not the only way you can get messages out there, and wouldn't work for every brand, and would lose its charm if it did.

"It's got over eight million views, meaning it's obviously gone global, but I don't know if that viral nature will continue, I don't know if any one does," Singleton said.

However, Core creative director Christian Finucance was adamant its hits would stagnate soon but suggested inviting the public to get involved would extend its life and reach.

"No doubt the rate of views will slow over time," he said.

"It would be great the extend the longevity of the idea by encouraging people to write, animate, upload and share their own version of the ad. Inviting viewers to participate in the campaign as well as just watching it will help give it legs."

What do you think of the campaign? Do you think its growth will continue? Let us know in the comments below.