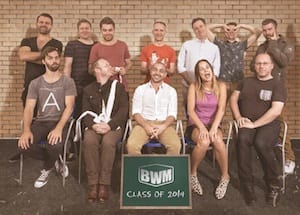 BWM has hired five new creatives in its Sydney office as it heads into the New Year. Chief creative officer Rob Belgiovane says it's about getting "fresh blood and fresh thinking" into the office and broadening the agency's offering, and the goal in 2014 is to get BWM's creative reputation "back to where it needs to be".

Creative director Andrew Ostrom joins from PushPlayUnderwear.com, an e-commerce underwear brand he co-created. Ostrom has worked at Ogilvy, Naked Communications, M&C Saatchi and BMF, where he worked on the original Toohey's 'Tongue' ad.

Belgiovane told AdNews the addition of extra digital talent with the integration of digital agency Sputnik which BWM acquired at the beginning of the year, as well as brand experience with the likes of Tom Manion, was about broadening BWM's offering.

He said there was "no question" the integrated model was where the industry was headed. Belgiovane cited BWM's 'Dog Buys House' TV/webisodes campaign for credit reference agency Veda as an example of where the industry is going. "It's absolutely not about channel anymore," he said.