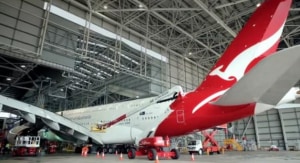 Australian airlines Qantas and Virgin Australia slashed their ad spend in the first six months of 2012, while foreign player Emirates Group doubled its outlay to become the second biggest-spending airline advertiser behind Jetstar, according to Nielsen.

Qantas decreased its main media spend by 40% year-on-year to $7.9 million, while Virgin dropped 53% to $6 million. Emirates doubled its outlay to $8.3 million, sitting just behind budget Qantas offshoot Jetstar, which spent $9.7 million despite cutting its spend by 10%.

While a Qantas spokeswoman put the decline in ad spend down to the launch of its rebranding campaign and advertising around the London Olympics in the second half of 2012, the news highlights the increasing pressure from Asian and Gulf players on the Australian airline industry, both in the form of traditional full-service carriers such as Emirates and Singapore Airlines, and an influx of low-budget offshoots such as the recently launched Scoot.

A Virgin Australia spokesperson said: "Our advertising spend is cyclical, based on when we are running campaigns and when we aren't."

One media buyer said: “Emirates has been buying market share left, right and centre. With Qantas and Virgin Australia, if a competitor isn’t spending, then you don’t have to do much to outshine them. So maybe there hasn’t been as much main media spend because they are not pushing each other. It’s not smart marketing but it happens.”

An Emirates spokesperson attributed the increased spend to the launch of the 'Hello Tomorrow' global brand campaign in March.

PHD chief executive Mark Coad said: “Qantas has been taking a hammering on its international routes, and it spends a lot for those routes within Australia, so maybe the company has stepped back a bit from its main media spend on that front. Maybe it has backed off because there is just too much competition and the wider market is down as well.”

Another media buyer attributed the decline to increased cost pressures and the competitive nature of the business driving money online. “Share of voice isn’t as important in [airline] marketing anymore – online and direct response are more important. People buy tickets these days based on price, not brand, meaning companies might not want to spend as much on main media brand advertising as they did in the past,” he said.

Virgin launched a high-profile rebranding campaign in May last year, later capitalising on the troubles at Qantas to execute a number of tactical campaigns in an attempt to poach customers. Qantas’ rebranding campaign by Publicis Mojo kicked off in July following its drawn-out pitch process.

This article first appeared in the 21 September 2012 edition of AdNews, in print and on iPad. Click here to subscribe for more news, features and opinion.