Ads mocking Apple 'marked a tipping point' for us: Samsung 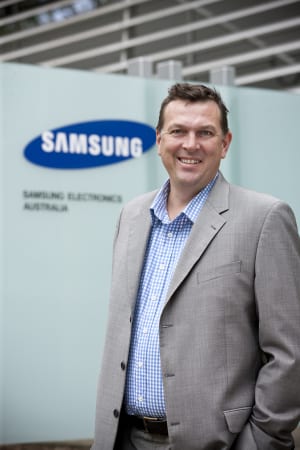 Samsung's fear of failure and "perpetual state-of-crisis mindset" is the reason the Korean manufacturer is now number one. Despite overtaking Apple in smartphone sales in Australia and globally, Samsung still sees itself as a “challenger” and invests heavily in R&D to stay ahead, according to marketing chief Arno Lenior.

Lenior said the fear of failure was embedded in Samsung's culture. “We look at things like the S&P 500 companies in 1997 – 87% of those companies are no longer in existence, whether they've been bought or merged or just failed,” he said.

“So that's in our mindset. We are not resting on our laurels when it comes to technology, that's why we invest so much in R&D.” According to Lenior, who spoke as a closing keynote along with Telstra's Mark Buckman at the ADMA Global Forum on Friday, Samsung spent $11 billion in 2012 on R&D plus $21.5 billion in capital expenditure projects.

Samsung “made 12 phones every second in 2012”, but Lenior said it was only within the “last 18 months or so” that the company had come to realise “the brand is the only constant”. “Products will come and go but the brand is what people are buying – and that was a pretty big call for us.”

Lenior said the ads mocking Apple, 'The Next Big Thing Is Already Here', signalled Samsung's coming-of-age as a brand. “That really did mark quite a tipping point for us globally. We were able to tell a cheeky story – if you think about it, we're a Korean company starting to really mess with the order of things.

“You've got fanboys after fanboys going, 'You can't put that out there', and then the Samsung fans saying, 'Yes, you can', and they're starting to have that conversation, which is brilliant. So that piece of content has been amazing for us, both globally and here in Australia.”

Asked whether Samsung had faced resistance coming into the market as a Korean brand, Lenior said: “I don't think it's resistance as such, but it's more around the affinity with the brand, what the brand actually means. It really hasn't meant a great deal [until now] – it's been a bit blank. So that's what we're trying to do, is build some soul around the brand. Pardon the pun.”

But he stressed Samsung's 'challenger' status. “I don't think the public sees us as a market leader just yet, and I quite like that. I like being thought of as a challenger brand – I think even though we will be in most segments a market leader, we will always be acting like a challenger. And that comes back to that perpetual state-of-crisis mindset.”

Lenior also touched on TV, saying it was “often forgotten” by brands. “We still think TV is the most social screen in the house. Roughly two million people have a Smart TV at home today. We know roughly 40% of them are already starting to consume huge amounts of content – anything from YouTube to Foxtel through IP, to social sharing.

“But the interesting thing for us as marketers is that actually there's no real brands taking advantage of it. I haven't seen too many brands actually looking at this social screen, this massive piece of real estate in the lounge room. Sure, people are doing second, third, fourth screen, but think of it as a massive tablet sitting on your wall, and what can you do with that? Technologies like gesture, voice recognition are coming into it, so think about the opportunities for brands.”