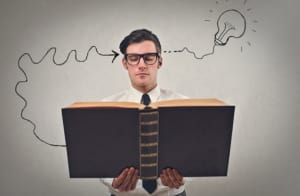 Would you like to be in Richard Silberstein’s shoes when you advance beyond 60 years old? I would! He works as a part-time professor, leads an internationally operating company in neuroscience, gives lectures in exciting places and has broad experience in the application of neuroscience in the media. He recently developed a number of interesting insights. - Mirjam Broekhoff sat down with him to pick his brain.

Q: You studied twittering during television programs for the Channel 7 network in Australia. What insights can neuroscience reveal about television and second screen?

A: “There are many program formats that include interaction with the public, such as dancing contests during which people can vote who stays in and who goes out. We can expect that interaction will become more and more popular in the coming years.

Because this is highly relevant to both the television channels and the media agencies, we teamed up with the Australian Media Agency MEC to find out what the effect is of the second screen on the television viewer while watching the program and the advertisements.

We wanted to know more about peoples’ mindsets during the use of the second screen: will it distract them, and what happens to their engagement? The results were in favor of interactive television. In our study, subjects would twitter during the program. We observed that this leads to higher activity in the frontal part of the brain, which indicates that the things you are doing are relevant to yourself: engagement.

The engagement level increased by 24% during the entire program. That makes sense: people know, while watching, that they are going to comment and vote, so we can expect them to be more engaged. We also wanted to know if Twitter diverts people’s attention away from the ads.

This is not the case, people twittered at the moments that they were asked to do so, not during advertising breaks. The activity of twittering increased their level of engagement during both the program and the ads.

Q: You often stress the importance of long term memory. Why do you feel that this is so important for establishing the advertising effect?

A: Encoding to long-term memory doesn’t have to be a conscious process, as long as it takes place. However, I don’t want to suggest that it is as simple as ’long-term memory encoding makes you choose and buy products‘.

We must realize that most people undergo thousands of experiences every day. Most of these will not be encoded or encoded weakly: they are filtered out. The brain usually encodes, or stores, the experiences that are highly relevant to the self.

That usually means that people feel engaged and/or feel certain emotions. When we observe high levels of long-term memory encoding while people are watching an advertisement, we know that the advertisement has ’pressed a hot button‘.

When studying advertising effectiveness, it is not necessary to know what particular psychological state or emotion
triggered the high long-term memory encoding, as long as it happens. A deficit of many studies is that they measure the results of advertising after a very short time interval.

For example, research is done by showing people a number of products or brands and asking them to choose one immediately after presentation.

This is not a realistic situation: normally there will be an interval of days, weeks or even months between the advertisement and the moment of buying. Only when the message is stored to long-term memory, is it possible for the advertisement to influence consumer attitude and behavior in the future.

Q: Another topic you’re working on is neurostates. What are they and why should advertising companies care?

A: A neurostate describes one measure of how the brain processes experiences. The technology we use at Neuro-Insight is Steady State Topography (SST). It enables us to measure the speed of neural processing in various parts of the brain on a second by second basis: the faster a part of the brain is working, the more active it is.

When using SST to measure neurostate, one of the most important factors is the balance between left and right hemisphere long-term memory encoding. When the left hemisphere encoding is higher than right, we have a positive neurostate where detail and dialogue is encoded more strongly and vice-versa.

He found that matching the neurostates of a program and an advertisement led to significantly higher effectiveness of the advertisement.

In fact, we have found that matching the program and advertisement neurostates can enhance advertising effectiveness by 25% - 40%.

This is very interesting,because it indicates that not only the neurostate that is elicited by a program is of relevance, but also that choosing the right program for the ads will improve advertising results.

When both ad and program achieve the same neurostate, the advertising message is going, so to speak, through an open door.

Q: You’re currently working on ‘Conceptual Closure’, a topic that is highly relevant to the media industry. What can you share with us now?

A: “I can’t go into the details too much because I want to publish them in an academic paper. But here’s the outline: Conceptual Closure has to do with how the brain processes extended experiences such as narratives or stories.

For example, telling a joke or presenting a video advertisement. Stories are compelling to the human brain; a good story elicits strong engagement and memory encoding. In several research projects I found that the brain has a specific way of processing stories: it encodes the information during the whole narrative and when an ending such as a climax is reached, it will reduce long-term memory encoding for about 1 to 1.5 seconds.

At this point, the event boundary, we think the brain is performing specific activities that are probably the processing and encoding of the narrative as a whole. We call this transient drop in memory encoding that occurs at an event boundary ‘conceptual closure’.

We think this is analogous to the phenomenon known as the ‘attentional blink’. In an attentional blink study, scientists ask a
subject to look at a series of rapidly changing targets, for example a series of letters, and they are asked to attend to the letter ‘x’.

It has been shown that when people see an ‘x’ they will often miss the next ‘x’ when it is shown within 0.2 or 0.3 seconds after the first one.

After this time interval, they do see the next ‘x’ perfectly well. However, conceptual closure is not the same as the attentional blink.

Conceptual Closure is very relevant to video and television advertising because often the narrative structure is that the advertiser tells a story which comes to its climax, after which the advertiser shows his payoff, the brand or other information that is important for future buying decisions to be made.

I hope we can validate this finding, because in that case, neuroscience will show a phenomenon that is highly relevant for the advertising industry that was not at all known before.”

Q: One of your tasks is acting as chairman of the NMSBA. What drives you to devote your time and effort to this task?

A: My main motivation here is to help the field mature.

At the beginning, people were excited by the sheer possibility of measuring biological process in the brain. Nowadays the field offers possibilities for businesses to take better marketing decisions. Many people working in neuromarketing are good market researchers making reasonable claims, but I also see people who make strong claims that are not substantiated by evidence and research.

Therefore, I think it is very important that we have an organization that can deal with our specific interests and issues. I want to mention that the lion’s share of the work is done by Carla Nagel and that she is really doing an excellent job!

This article is from the NMSBA. For details on the fourth edition of the Neuromarketing World Forum in Barcelona, check out the NMSBA website.