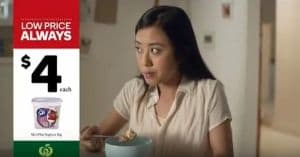 The latest campaign, created by Leo Burnett, supports the supermarket giant's $500 million investment into slashing grocery prices and improving its value perception in order to tackle huge competition from Coles and Aldi.

The Cheap Cheap campaign, which featured singing cartoon birds, was panned by some marketers for being too similar to Coles' famed two-word 'Down, Down' slogan.

Earlier this year, Woolworths said that while Cheap Cheap was well received by customers, it didn't have the impact on business that was anticipated.

“While our Cheap Cheap campaign has been well received by customers, our promotional programs were not as successful as we expected and we did not see the improvement in price perception we anticipated during the quarter,” the supermarket's half-yearly 2014/15 financial results statement said.

'Always at Woolworths' will run in print, online, television and radio and features 30 and 15-second spots that drive home the supermarket's latest 'low-price always' messaging.

“Woolworths always calls out its value offer to our customers, and the new 'low prices, always' campaign does just that," a Woolworths spokesman said told the Sydney Morning Herald.

"It tells our customers than on hundreds of products across our stores they can expect the same low prices – week-in, week-out, the prices will be remaining at the low price."