Which brands trumped the Presidential Debate? 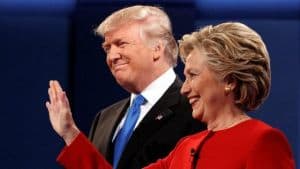 Yesterday's US Presidential Debate between Hillary Clinton and Donald Trump was watched by some 100 million people worldwide and brands we're quick to try capitalise on the global attention.

Brands such as Audi and Jeep used the broadcast to debut new election themed ads, Mexican beer brand, Tecate, showed a spot which featured a wall that it the perfect height to rest a beer on and the cast of Will & Grace, a sitcom which hasn't aired an episode since 2006, reunited to talk all things Trump and Clinton.

According to Amobee's brand intelligence data, Tecate managed to hit a marketing 'home run', with the brand seeing more than 400 tweets using its hashtag #TecateBeerWall, as well as seeing its digital engagement reaching the highest level it has in three months.

Aussie brands even got in on the action, with Sportsbet taking to social media to share its thoughts on the spectacle. 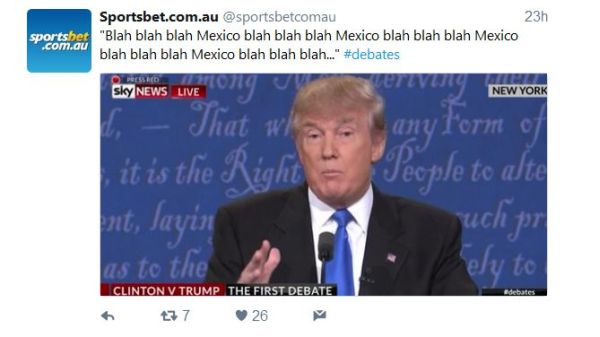 The debate aired on television in the US, however globally it was streamed via social network Twitter. While Twitter is yet to reveal any streaming stats, locally the debate was trending on Twitter with thousands of Australians engaging with the platform during the debate.

Twitter has however released information around which candidate was getting the most Twitter love (or hate) during the debate, and unsurprisingly Trump came out in front gaining 62% of the conversation versus Clinton with 38%.

Trump also had the most re-tweeted tweet of the debate. Unfortunately for Trump, that was due to him claiming mid-debate that he didn't previously place the blame for climate change squarely at the feet of China, however unluckily for him internet super sleuths found the offending tweet from 2012 and brought it back to forefront, making it the most tweeted piece of content from the debate. 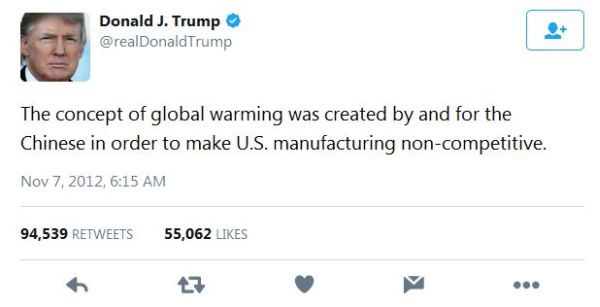 Watch the ads below for yourself:

"Free To Be" - 2017 Jeep Grand Cherokee Trailhawk and Summit spot