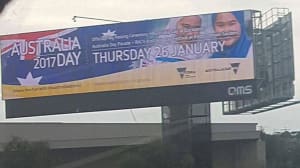 UPDATE: QMS has removed the billboard ads after threats

The sign advertised details of an RACV-sponsored event at Melbourne’s King’s Domain Gardens.

The two smiling women were the only people featured on the billboard, which also included an Australian flag.

It appeared alongside the Peninsula Link Freeway in Melbourne’s south east and sparked online outrage after a photograph of the sign was shared on Facebook.

One person on Facebook said: “Go and get f*cked with all this political bullshit. At least leave us one thing with the Southern Cross, a box of VB and a couple mates playing cricket. Who the f*ck wants to see a hijab on Australia Day?”

Another person said: “This is the most un-Australian thing I have ever seen.”

But many social media users defended the billboard.

"First of all this billboard is one of many highlighting the different cultures Australia has to offer, they are not just made for Muslims," a Facebook user says.

"For people to find shock in this, shows how racist or biased most people have become."

The RACV said the billboard was part of a broader Victorian government campaign to promote Australia Day.

It told Nine News it stood by the billboard saying it was “proud” to be the major supporter of the Victoria government’s popular Australia Day festival.