When the going gets tough, the tough GoPro 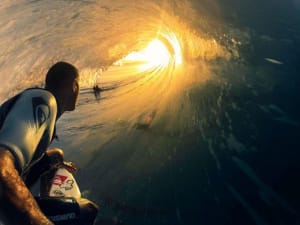 GoPro has built its business on successful content marketing, attracting a following that would make even Red Bull jealous. But it’s not enough. Now the company has realised it has to tap above-the-line channels to retain its market position. Content creators, beware of this cautionary tale. Nicola Riches reports.

Effective content marketing is often cited as the holy grail of modern marketing, but there are few brands that have played the content game as well as GoPro over the past 10 years. But GoPro is finding that content is not enough.

Founded in 2002, the company is in a unique position where its products allow it to straddle two camps with ease: hardware and content, although GoPro global creative director Brad Schmidt (pictured below) disputes this and reinforces the company line. “We own the camera space,” he insisted, “not the content space.”

Schmidt was in Sydney in late 2015 to promote the GoPro Awards, a newly created initiative billed as a way for the company to show its “appreciation for the positive impact” customers have made on the brand and the business.

GoPro is showing its appreciation by way of a US$5 million cash fund it will divvy up among comp-etition winners of video and still footage uploaded to GoPro channels. The company already pays users US$1000 if their footage generates more than one million views on YouTube, but the awards formally recognise its creators.

It also flags that content creators will receive “global exposure” for documenting their passions. Re-phrase that maybe and what GoPro is hinting at is user generated content (UGC) being used in a renewed push to mainline the brand’s message into households across the world, for the first time via TV ads.

“GoPro Awards is a natural extension of what we have been doing for years,” Schmidt said.

“It creates what we call a virtuous cycle where the content you’ve created inspires other people. It not only inspires our community but creates a snowball effect for the brand to reach even more people.”

He is exactly what you would expect a GoPro creative director to be – the living embodiment of the brand: a dressed-down, dishevelled surfer, bursting with energy and positivity. He enthuses about meeting GoPro users in a special gathering at Bronte Beach. We asked him to answer a few questions while surfing — using a GoPro obviously — which he gamely did. You can watch it here.

Pre-Christmas the company was holding back information about new products coming down the line in 2016 and its share price was taking something of a battering. Throw in the predictable acquisition target rumours – surprise, surprise Apple was in the fray as a potential suitor – and the general feeling was that GoPro had to up the ante or subject itself to a worsening fate.

GoPro stock plummeted to an all time low in mid-January following the release of preliminary results signalling a drop in revenue.

The firm has effectively seeded its awards program, remained robust with strong sales over Christmas and has started marketing its new product, the ‘Karma’ drone, which can shoot 360-degree footage.

It had previously moved into the virtual reality (VR) realm via the acquisition of VR-enabling software company Kolor, struck a deal with Samsung for its VR headset and previewed its content on Facebook’s 360-degree video option, unveiled in November.

But, GoPro’s journey will probably sound a warning to the endless list of other brands chasing the content prize. Its bumpy ride is nothing if not proof that relying on a content-based advocacy strategy is not enough to guarantee a dominant position in the marketplace.

While UGC has taken centre stage in GoPro’s marketing strategy, it is now faced with rising competition, particularly in the drone and VR space.

Many other brands, including Samsung and Sony, are making strides in the same hardware space as GoPro, and playing the content game in a big way.

While it won’t abandon its core purpose, 2016 will see GoPro stretch beyond action sports and engage a more tradtional advertising plan to mainstream the brand beyond its extreme sports associations.

“We are definitely putting more towards the UGC with our GoPro Awards program but we are also going back to TV buys as well,” senior global director of communications Rick Loughery told AdNews.

“We have done a good amount of TV buys here in the States and we will be looking to buy some TV internationally as well,” he revealed.

The switch to TV fits with what Schmidt confirmed is a wider expansion plan.

“We won’t swing into a left field and forget our history,” he said.

“It will be about maintaining action sports, but also expanding into newer areas: family, travel, music, arts, entertainment, sports, anything anyone is passionate about,” Schmidt added, revealing that the company is aware it has to capture and reflect a market that goes beyond surfboards and mountain bikes.

As GoPro enters a new era of new products, expansion and bolder advertising, it still bucks the trend in one respect — all creative is kept in-house as it does not engage the expertise of creative agencies. Naturally, when your message is fuelled by UGC, it’s pretty easy to dispense with such agencies, but all the same, this is no easy feat.

“Our brand is fairly specific. What we’re looking for – what is inspiring and immersive, and what we have evolved internally – to get an outside agency do it, well, you could probably do it, but the learning curve on that might be more effort than it’s worth,” Schmidt explained.

The creative teams at GoPro are divided into two: anything consumer-facing, but not video, is headed up by Christina Anderson and her team of 80-plus people, and the moving image department led by Schmidt, who has 150 people working under him.

It’s a significant investment that allows the company to keep all of its cards very close to its chest.

“Having that engine inside of GoPro to create all the ads, all the assets and all the marketing, has ended up being very advantageous,” Schmidt revealed, “and is probably less expensive and more concentrated.”