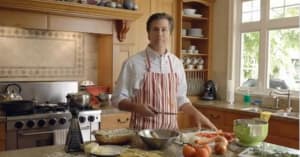 Australia has been named the number three in the world when it comes to marketing effectiveness and strategy, according to the Warc 100. It drops one spot from second place in 2014.

The ranking is an annual list of the world's best marketing campaigns and companies and is based on performance in effectiveness and strategy competitions.

Australia ranked number three overall, following the US and the UK.

The leading Aussie agency is McCann Melbourne, arriving at number six in the overall top creative agencies in the Warc 100, moving up from 17th spot the year prior.

The agency had three campaigns in the top 100 rankings with Dumb Ways to Die for Metro Trains, Victoria, reaching number 18 and Guilt Trips for V/line reaching number 19. Its 100 Day Challenge campaign for the Victorian Responsible Gaming Foundation reached number 76.

Speaking to AdNews, McCann Melbourne MD Adrian Mills said the result goes to the heart of the agency's motto.

"It's a reflection of the agency's belief in finding truths that are a really powerful, telling them really well and focusing on campaigns that will genuinely make a difference," Mills said.

"The campaigns that are in there are all examples of work that sets out to change the way people feel and for them to be effective is no surprise but its validating nonetheless."

The only other Australian agency in the global top creative category was Whybin\TBWA Sydney, which was number 20, down from number five the year before. Its Car Creation campaign for Insurance Australia Group reached number 54 on the list

In the top 100 media agency category, UM Sydney was the top-ranking Australian agency, reaching number five on the list. Its campaign for the Department of Families, Housing, Communities and Indigenous Affairs, XTL, was the 34th campaign in the top 100.

UM CEO Mat Baxter said the campaign had a "social core" and showed how to build success in a changing media landscape.

"It validates and reinforces everything we've done in the last two weeks with repositioning the agency which is to be about connections rather than paid media," Baxter said.

"Good media agencies have expertise in connecting audiences and brands and those connections don't always have to be forged through paid media. They can be social networks and owned assets - that expertise can be applied across the board." 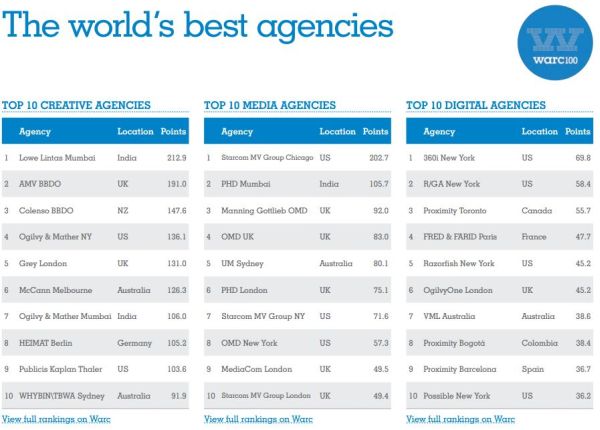 The highest ranking Australian campaign in the Warc list was Virgin Mobile's 'Fair Go Bro' campaign by Havas Worldwide Sydney and One Green Bean. Both agencies, along with Starcom MediaVest Group appeared on the list again for work with Virgin Mobile, with its Game of Phone campaign reaching number 64.

Havas Worldwide Australia head of planning Phil Johnston said the success of the ad was a testament to the power of a creative idea, engagement and collaboration between agencies and a brand.

"That's how it came to be," Johnston said. "It's a great idea that commanded attention and we worked together - with One Green Bean and Starcom Mediavest - to make it happen."

"It worked in the mainstream and attracted people’s attention because it was funny. Taking Brad Pitt's brother and giving him a crack because it was only fair and then tying it all back to the brand."

One Green Bean global executive creative director Kat Thomas said: "This was a campaign that clearly demonstrated that having a PR agency lead the creative for an above the line campaign results in work that gets seen and talked about everywhere. We’re thrilled it continues to achieve recognition for its creativity and success"

Warc CEO Louise Ainsworth said: “These rankings reflect an incredible body of work from across the globe.

“Congratulations to the clients and the agencies who made it happen.

“Together these campaign form an inspirational set of case studies, from which brands and agencies everywhere can learn.”

Globally the number one campaign on the Warc list was 'Kan Khajura Tesan', a campaign for Hindustan Unilever developed by Lowe Lintas and PHD in India. The campaign saw the creation of an always-on media channel offering music, jokes, Bollywood content and advertisements to reach a “media dark' rural Indian population.

The top agency network for 2015 was BBDO Worldwide, with WPP listed as the top holding company.

Coca Cola was the top brand in the ranking, beating McDonald's (2nd) and Mercedes-Benz (3rd). Meanwhile, Unilever was ranked the top advertiser, ahead of Procter & Gamble. 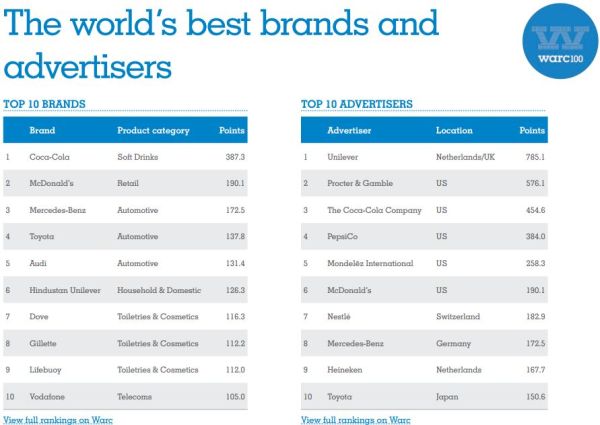