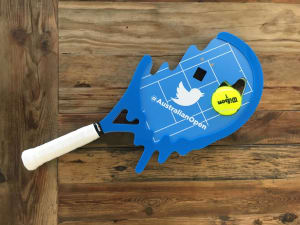 With the first tennis Grand Slam of 2016 kicking off with the Australian Open in Melbourne today, Twitter has released exclusive content for fans to follow and join in on the action of the tournament.

Last week, AdNews announced Periscope will be embedded in the Twitter ecosystem; a feature that is being used in the Australian Open. A Periscope racquet will be broadcasting live Q&As with tennis players and giving fans snippets from the tournament in real-time.

Another feature is the Twitter emojis that coincide with five hashtags: #AusOpen, #AOSelfie, #SleepIsForTheWeak, #Tennis and #HewBeauty, honouring Lleyton Hewitt’s 20th and final Australian Open Tournament. #AusOpen is currently trending on Twitter with the @AustralianOpen account posting the latest tournament scores, commentary and behind the scenes content.

"Users love Twitter emojis and with millions of tweets expected to be sent about the #AusOpen by fan globally, we want to encourage them to add some personality, fun and colour to their Twitter experience," Twitter Australia sport partnership manager, Jonathan Simpson says.

"This is the third year that Twitter has been working with Tennis Australia and it isn't an exaggeration to say that @AustralianOpen is one of the best global sporting events accounts in the world that we have on Twitter," Simpson adds.

Brands such as Medibank, IBM and ANZ have used the hashtag and players have jumped on the bandwagon too, including Ana Ivanovic and Dominika Cibulkova.

The Hewitt icon features the tennis player with his well-known backwards cap, and the #AusOpen has an emoji wearing a cork hat.

This year has been no different, with 150 tweets per minute at 2.30pm on the first day of the competition, and @7tennis total online streams hitting over 550,000 breaking the 2015 Melbourne Cup record.