Those planning on a multiscreen advertising journey should have some insight into what works with the latest Nielsen, OzTAM and RegionalTAM multiscreen report stepping out exactly what people are using their various devices for.

Sequential targeting has become an emerging trend, with marketers increasingly talking about which device to target campaigns, at what time of day, and what content works best across TV, tablet, mobile, and PC.

The latest multiscreen report  has stepped out exactly what people are using their various devices for. 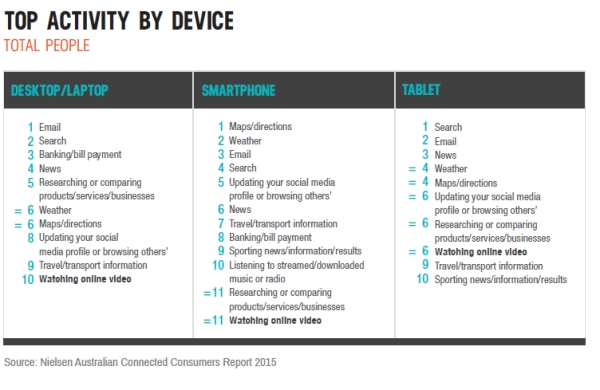 Microsoft is one company attempting to capitalise on the current thinking about the customer journey, pitching to agencies and brands in Australia and New Zealand about its latest multiscreen research.

Speaking to AdNews yesterday, its global research and insights manager for emerging markets Thom Arkestal, said it was attempting to tweak the conversation for marketers.

“I think we're trying to change the conversation a little bit,” Arkestal said.

“The opportunities to engage with consumers across so many different aspects of their life is the new way of thinking. It's not just shoving [advertising] in, we want to be where the consumers are. It's not about saying 'this is where we are' and then trying to lure them in.”

It is pitching its Microsoft ID as a way to connect with consumers across devices, as audiences continue to multiscreen, using each device for a different purpose.

Research conducted by Millward Brown presented by Microsoft indicated that 40% of screen time is spent on multiple devices.

It broke devices down by consumer behaviour, with the tablet considered the “explorer”, meaning that advertisers should give consumers visual content that inspires. The PC by comparison is considered the “sage”, meaning there should be more detailed and complex information presented.

“What we're trying to bring to the Australian market is to educate about how people are engaging with different devices, the way they're engaging with different devices, the pathways they're taking on those devices and being able to link those devices to people so we can enable multiscreen targeting rather than looking at each screen in isolation,” Arkestal said.

Arkestal also said brands were increasingly concerned with wasting a message on a screen which may not be suitable.

“Every single brand we talk to is interested in limiting waste in terms of 'we're buying impressions, but we're never really sure if it's optimised for the message for the screen',” he said.

“It's likely that brands are wasting a whole bunch of impressions by delivering the wrong type of experience or message to the wrong device. That's the strongest conversation. We don't want to reach more  people, we want to reach the right people.”

Microsoft is also in market presenting new information on the habits media consumers.

It classified 68% of consumers as 'content grazers',  where different content is consumed on two or more devices simultaneously.

Meanwhile, the latest Nielsen report found that 31% of people aged 16 or older in Australia "triple screen", up from 26% the previous year.

As with previous multiscreen reports, the theme is that broadcast TV through a TV remains the top media consumption play, but the proportion of people viewing video on other devices continues to grow.

During the latest quarter people consumed an average of 89 hours and 28 minutes of broadcast TV through a television set per month, down from 93 hours and 16 minutes in the previous corresponding period.

It said that more than 22 million Australians watched broadcast television each month during the first quarter.

However, younger demographics continue to seek video opportunities outside of the traditional TV context, with a 14% decline in the amount of people aged between 18-24 watching a TV broadcast through a TV set year on year.

Interrestingly, the amount of video being consumed on smartphone in the demographic almost doubled from four hours and nine minutes a year previous to eight hours and 30 minutes in the latest quarter.

A total of 89 hours and 28 minutes per month was used to view video on a TV screen, whether through live TV or watching playback TV, while 11.6% of all video viewing whether broadcast or non-broadcast occurs on laptop or PC, smartphone, and tablet.

Just  6.9% of video viewing occurs on PCs or laptops, 2.7% occurs on smartphones and 2% occurs on tablets.

While the amount of people watching live TV is still huge, the trend is slightly down as the amount of minutes spent watching catch-up TV continues to grow.

The report found that people spent seven hours and 31 minutes per month viewing playback TV, up 16 minutes on the previous year.

However, one small but growing segment catching the eye was the the amount of people watching playback more than seven days from original broadcast.

It found that 1.66% of all TV viewing is done on a catch up basis between eight and 28 days after the original broadcast, up from 1.06% in the previous corresponsing period.

While a small percentage, only playback within seven days is included in the official OzTAM consolidated TV viewing figures, meaning those viewing outside of this window are essentially left off official data.

OzTAM CEO Doug Peiffer said the shift showed that people were increasingly choosy about when to consume their content.

“We continue to see Australians spend a little less time at the ‘full buffet’ of live linear television and a little more time viewing ‘a la carte’, watching their favourite TV shows when they want,” Peiffer said.

“Also, there is an increase in time shift viewing beyond seven days, as reported in this quarter. We’ll continue to keep an eye on this evolving behaviour.”

“People are continuing to evolve the way they consume media and are leveraging technology more, and, in increasingly varied ways,” he said.

“Playback continues to grow as does delayed viewing with an increase in 8-28 days, showing that people are more prepared than ever to watch content at their own convenience.”