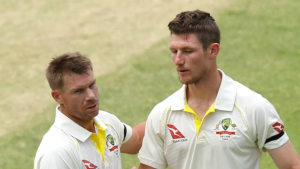 The automotive brand confirmed to AdNews it would no longer be working with the former vice captain, who has now been suspended from the game for 12 months after being implicated in the recent ball tempering scandal.

“Based on David’s suspension and in light of recent events, we can confirm that we have ended our partnership with David Warner,” a Toyota spokeswoman said.

Toyota’s decision came as Warner confirmed yesterday he would not appeal against Cricket Australia’s one-year suspension.

This is the third sponsor to drop Warner after Asics and LG last week.

Magellan also pulled the plug on its three-year, $24 million sponsorship of Cricket Australia, which lasted only one series.

Out of the several sponsors that first expressed their "shock and disappointment" when the scandal first broke, only XXXX Gold and Qantas have not officially taken some form of action against Cricket Australia or the players involved.

Sports marketing experts told AdNews last week that although sponsors of Cricket Australia would be mortified, they don’t believe all sponsors will abandon the sport.