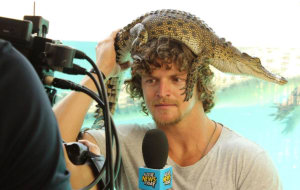 Tourism Australia has invested $5 million in the launch of a new TV channel-style content push as it ramps up efforts to attract young European tourists to Australia.

Stories on Aussie News Today will be hosted on Australia.com and will feature across social media, including dedicated Facebook and Instagram profiles.

CMO Lisa Ronson says these figures make targeting the youth market a lucrative play for Tourism Australia, as well as the Australian economy.

“Our goal is to drive expenditure for the Australian economy and that’s very much what youth do,” Ronson tells AdNews.

“They stay a lot longer, they disperse into regional areas and they become advocates after experiencing what Australia has to offer.

The campaign is part of a wider push from the government, investing an extra $10 million in funding over three years for youth-led advertising campaigns.

Ronson says the partnership with BuzzFeed has allowed Tourism Australia to explore its humorous and youthful tone, as well as zone in on its key audience of 18-29 year olds.

“There is a lot of clutter in the market for our target audience so we needed to make sure we were are remaining relevant as well as positioning Australia as a very unique experience,” Ronson says.

"We are lucky to have the best beaches in the world, as well as amazing food and wine scenes, but we needed to present that unique way of life and experiences in a clever way."

From crocodile cage dives and selfies with quokkas, camel racing and tuna throwing competitions, Big Bananas and Giant Pineapples, the content will focus on what Tourism Australia considers Australia's three pillars, being food and wine, aquatic coastal and nature and wildlife.

The first video (above), released today, features a koala shopping and a crocodile eating a man's hat as a teaser of what's to come. It has already racked up nearly 50,000 viewers.

While the campaign is digitally led, Ronson says Tourism Australia isn’t walking away completely from TV, but admits its budget is split 60/40 favouring digital.

In the past, Tourism Australia has relied on big names in its ad, including Lara Bingle and Chris Hemsworth. While the appeal of a celebrity is always a winner in earned media, Ronson is confident the combined social media following of the Honey Badger, Lewis and Nash will deliver strong results.

The campaign has been developed in partnership with creative agency Clemenger BBDO Sydney, UM and One Green Bean.