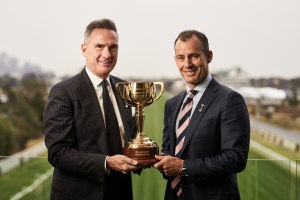 Ten will take over the broadcasting rights of "the race that stops the nation" in 2019 through to 2023, after securing a new five-year deal worth $100 million.

Network Seven previously had the rights and is thought to have paid a far lower cost, between $2m to $5m per year.

The $20m per year deal between Ten and the VRC is the biggest in the club's history and one of the largest in racing globally.

Despite the hefty cost, Ten CEO Paul Anderson remains confident that the biggest race on the sporting calendar will yield strong viewer and consumer interest, with Ten already looking into both product and programming integration around the event.

"For any sporting event there is going to be a cost associated with it but we feel that we've got a strong alignment with the VRC to work with them right across the year," Anderson says.

"While we want to be leveraging those four key races across the carnival, this is a sporting property that will live on the network right across the year.

"There are lots of different ways that we can incorporate this sport into our programming, whether that's through shows such as MasterChef, The Bachelor or The Living Room, there are certainly some clear opportunities for us."

Anderson says the new deal will provide the network with further advertising opportunities, particularly with brands heavily associated with the racing and wagering industry.

Anderson would not rule out further investment in the sport, stating that the network was focused on adding more sporting coverage to its programming over the next 12 months.

"The ability for us to leverage our brand and now play in different advertising areas such as the wagering sector, which we haven't had much opportunity to engage in the past, is extremely important," Anderson says.

"Our strategy is always going to be to add major sporting events where we can and that time of year aligns with us promoting our platform in the back-end of the year and launching ourselves into summer.

"We will take this one step at a time. Obviously, if you were going to build up a sporting code you would start at one end of the spectrum, so we've been lucky to start off. We are absolutely interested in more horse racing and will continue to evaluate those options on a case-by-case basis."

See: $100m is a small price to pay for Ten's sporting relevance

Network Ten has also agreed to terms with Racing.com to provide live coverage of all races across the Melbourne Cup Carnival on its channels and the Racing.com app.

The live vision streaming rights for wagering service providers are excluded from the deal with Network Ten.

“These are the broadest set of rights that the VRC has ever offered around the Melbourne Cup Carnival and is a significant expansion on previous agreements." VRC chairman Amanda Elliott says

"The process highlighted that Network Ten’s energy and commitment to showcasing the Melbourne Cup Carnival throughout the year best aligned to our strategy.”

Seven will remain the VRC’s broadcast partner for the 2018 Melbourne Cup Carnival and Group 1 racing from Flemington can continue to be viewed on Seven until at least the end of June 2020.

Network Ten previously held the television rights to the Melbourne Cup Carnival for 24 years from 1978 until 2001, when they were won by Seven in 2002.

Last week it was believed that Ten had only paid in the region of $5-10 million annually for the rights, as opposed to what is now double that initial figure. Seven's deal was reported to be less than $5 million annually.