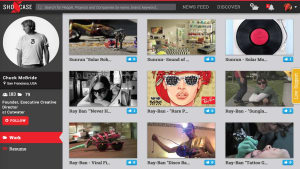 Ever hear about a new social network which seems cool, but then despair about having to create a whole new profile for yet another social networking site? Shocase is hoping to avoid that.

The new social networking and portfolio site aimed at the marketing and advertising community launched this week in the US after about five years in the planning, but it is also targeting other English-speaking markets.

The site's founder, Ron Young, looked out at the social networking ecosystem and found nothing great specifically for advertisers and marketers to showcase their work.

“We wanted to take the best of of Facebook, Pintrest, and LinkedIn, but none of those alone was really what was appealing to marketers, or at least the vision we have,” Shocase's director of PR Dean Fisk told AdNews this morning from San Francisco.

The pitch from Shocase is relatively simple – it wants to be the place people in the industry get noticed, stay informed of developments in the industry and to build their businesses.

Users do this by building their on-site portfolio, showcasing which campaigns they have worked on and in what capacity.

But here's the great part: users don't neccesarily have to put in the grudge work to build that portfolio.

Thanks to a proprietary system, the site has ingested 27,000 to 30,000 campaigns including information on who worked on them and in what capacity from all over the web.

Plans are underway to have 100,000 campaigns in the system within weeks.

Once people put in some details about who they are, the site engine auto-fills their portfolio page and asks the user if it looks right. If it does, happy days. Users can still tweak around the edges, but the grunt-work is taken care of.

“That whole system was built by our team,” Fisk said.

“We have four PHDs in the team, one from Oxford, one from MIT, and one from the Russian Academy, so some really heavy intellectual hitters. So that's our own propietary system.”

Giving financial weight to the project were a series of about 100 individual investors, raising $17 million in two tranches.

“It's not that we're saying no to venture capital down the road, but it was the view of our founder Ron Young that VC really is the middle man,” Fisk said.

“He had experience with a lot of startups, so he knew people in the investment community anyhow. It's not like they're his friends and family, but some of them had worked with Ron before.”

Those investors will now be looking for a return on investment, and while the site was free there was scope to include 'freemium' features.

“Right now the focus is on simply getting people onto the site, but we operate on a freemium model. If you look at LinkedIn, about 99.7% of the people on there are using the bare-bones version of it, so those 0.3% are the ones signing up for the additional functionality,” he said.

“Eventually where we want to get to is having recruiters being heavy users of the site, so that's where we think we can really target.”