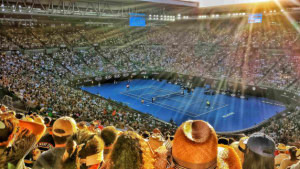 Seven has expanded its Australian Open commercial program and says that “dozens and dozens” of advertisers have been investing in its addressable advertising solution.

“It's been a highly successful campaign with our sponsorship architecture being the fullest it's been and the richest its been in terms of major brands,” Seven West Media network director of sport sales Patrick Moloughney tells AdNews.

“It is record revenue, but to us we don't see that as a badge of honour...what's important is how we are able to increase the value offering right across the board.”

“We're delighted with how ratings are holding and getting growth. If you look at Tuesday night for example, on Seven and 7mate we're reaching 3.8 million viewers nationally versus our nearest competitor in a sports sense Ten at 2.3 million.

Part of the reason Seven has been so successful is that they began selling Australian Open packages last April, rather than September.

“This gave us a greater runway to strategise with brands, creative agencies and media agencies further upstream. It also allowed us to be more strategic in how we approach and price our media and cross-platform oppoprtunities," Moloughney adds.

Another advantage Seven has is that it owns all of the digital rights to the Australian Open, which means that brands can have a “continuous flow” of content regardless of the medium it is shown on.

Brand integrations and leveraging tennis across broadcast and digital platforms are the primary way Seven is able to offer more value.

One example Moloughney points out is Kia – a brand that he says has been “courageous” in its activation for this years tennis season.

“Previously Kia and many other brands would see the event as two weeks and everything else as outside. But this year they've seen a huge opportunity in the road to the Australian Open by brining great on air talent tennis talent like Lleyton Hewitt,” he says.

“There's magnificent creative that follows the story of Lleyton in Brisbane, down to the Gold Coast and down to Melbourne in one of their cars.”

Mastercard has also used its Priceless moments campaign as a vehicle bring the Happy Slam to life each day on Seven's broadcast. 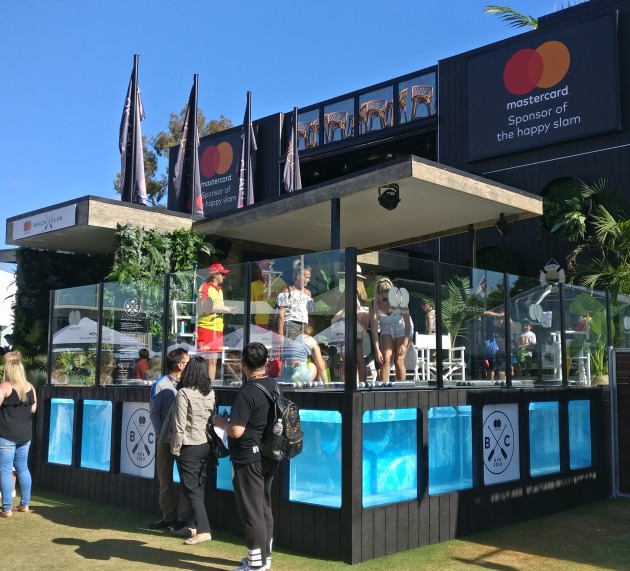 Mastercard's Beach Club is one way the payments company is making more of its Australian Open sponsorship.

Then there's Samsung, which is new to the Seven AO family. “Who would have thought you'd be able to integrate a fridge into a tennis telecast and make it a relevant integration,” Moloughney says (see creative below).

“For us it's not about shoving a product brand integration and accepting money, it has to have a logical fit.

“We've been able to integrate their family hub fridge, we're using the likes of 22-grand slam winner Todd Woodbridge and Henri Leconte to be able to interact with the fridge and use tennis to showcase the benefits of that technology.”

ANZ, a long-time partner of Seven's tennis coverage, has used wheelchair tennis champion and world number 3 Dylan Alcott as the face of its campaign.

“Gone are the days of a single spot ad acting on its own, we're trying to utilise the essence of what their campaign is and link that into the philosophy of our tennis. It's important to make it authentic and find those true connections on the way,” Moloughney says.

He adds that brands are adapting their creative to be more relevant to the tennis and the growth of the game.

“Authenticity doesn't happen overnight, it takes time. It means that you need to adapt creative and align them to a number of stakeholders along the way. We are seeing a lot more creative evolved along the way and the viewers at home are responding to that, it doesn't become an interruption it becomes informative," Moloughney says.

Seven views its tennis coverage as “platform agnostic”, not broadcast or digital, but just 'tennis'. Its cumulative broadcast figures for the first 10 days are 10 million, an average audience increase of 6%.

Where the real growth lies is in digital viewing, with the number of minutes viewed is up 96% to 71.5 million minutes.

“There's a really significant growth in viewers wanting to consume sport via IP-delivered video. To separate broadcast and digital doesn't make a lot of sense to us or to our partners,” Seven's digital sales director of OTT video James Bayes says.

“With the launch of 7Plus we now have to complimentary products for the Australian Open. We have 7 tennis which is fantastic for the super fan who wants to explore and engage with content across back courts. 7Pluse is a very simple way with people to engage with screens of our broadcast tennis.

“Addressable TV is really humming in the Australian Open technically and from a brand perspective. There have been dynamic ad insertions on large screens for the first time in this market. It's creating a significant new opportunity for brands to engage in a targeted fashion with audiences across those platforms.

Bayes says there are “dozens and dozens” of brands that are buying addressable advertising inventory.

“Most partners that are engaged with our digital assets are buying across the full portfolio. There are some clients that have specific strategic priorities around certain devices and times of day, but mostly those brands are buying right across the digital portfolio, including pre-roll and addressable on large screens, CTV, mobile and so on.”

In terms of targeting, Bayes says it's “early days” for addressable TV and Seven will be evolving the granularity of targeting “quite aggressively” over the next year by complimenting first party data with second party data partnerships that will be announced in the next few months.

At present, Seven is able to target via age, gender, location and programming preferences and has had several brands buy directly into digital assets.

Tennis Australia has also grown its commercial programme across its summer of tennis.

This year's Australian Open, which AdNews attended as a guest of Dentsu Aegis Network, was more like a 14-day food and entertainment festival, packed full of concerts, a children's theme park in partnership with the Walt Disney Company and plenty of good vibes.

It found that the AO brand has “a strong association with being world-class, popular and for high-quality tennis”.

The same report found that digital spend across display, performance, search and social resulted in a 20 to 1 return on investment, with prospecting and retargeting from Ticketek the most cost effective method to drive ticket sales.

The Australian Open is developing a reputation as being one of the top global sports events anywhere in the world and is a valuable sports asset for Seven to drive advertising and sponsorship revenue as well as promote its upcoming content slate.