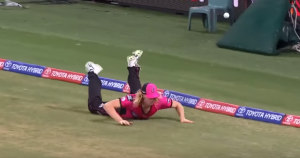 Last night's clash between the Sydney Sixers and Melbourne Renegades, a normally heated and well-watched Melbourne against Sydney clash, drew in the lowest prime time free-to-air audience in the competition's history, mustering 399,000 viewers in the second session.

The decline in Big Bash viewership has continued over the past week, even as the competition draws closer to the heated finals run, with only a month until the grand final clash on 17 February.

The declining viewership of the Big Bash, which Seven has previously claimed is underpinning its summer programming strategy, will have a significant impact on the promise the network made late last year to "dominate summer" with a 40% audience share across all demographics.

Elsewhere in ratings, the race between the Australian Open and Ten's I'm a Celebrity Get Me Out of Here is drawing closer, with I'm a Celeb pipping the tennis by only 10,000 metro viewers.

Overnight, Ten's celebrity reality program narrowly held onto the top primetime spot for the fourth night in a row, drawing in 736,000 viewers, while Nine's coverage of 'night' three of the Australian Open followed closely, with 726,000 viewers.

The Australian Open grew its audience by a further 110,000 overnight, up close to 200,000 since opening night.

The growth in Nine's tennis audience overnight could be attributed to the primetime women's singles match between Australia's Zoe Hives and Caroline Garcia, as well as both the men's and women's singles reaching the round of 64.

In the overnight main channel race, Nine continued to dominate as a result of the Australian Open, with a 25.3% share, while Seven barely held onto second place with 14.5%, with Ten hot on its heels with a 13.5% share.

The Australian Open continues today with Serena Williams and Novak Djokovic both taking to the court in primetime this evening as the round of 64 draws to a close.

Ten will also look to take out its fifth consecutive night at the top of primetime, with I'm a Celeb back tonight, while Seven will look to recover its BBL audience as the third place Sydney Thunder take on the sixth place Brisbane Heat.